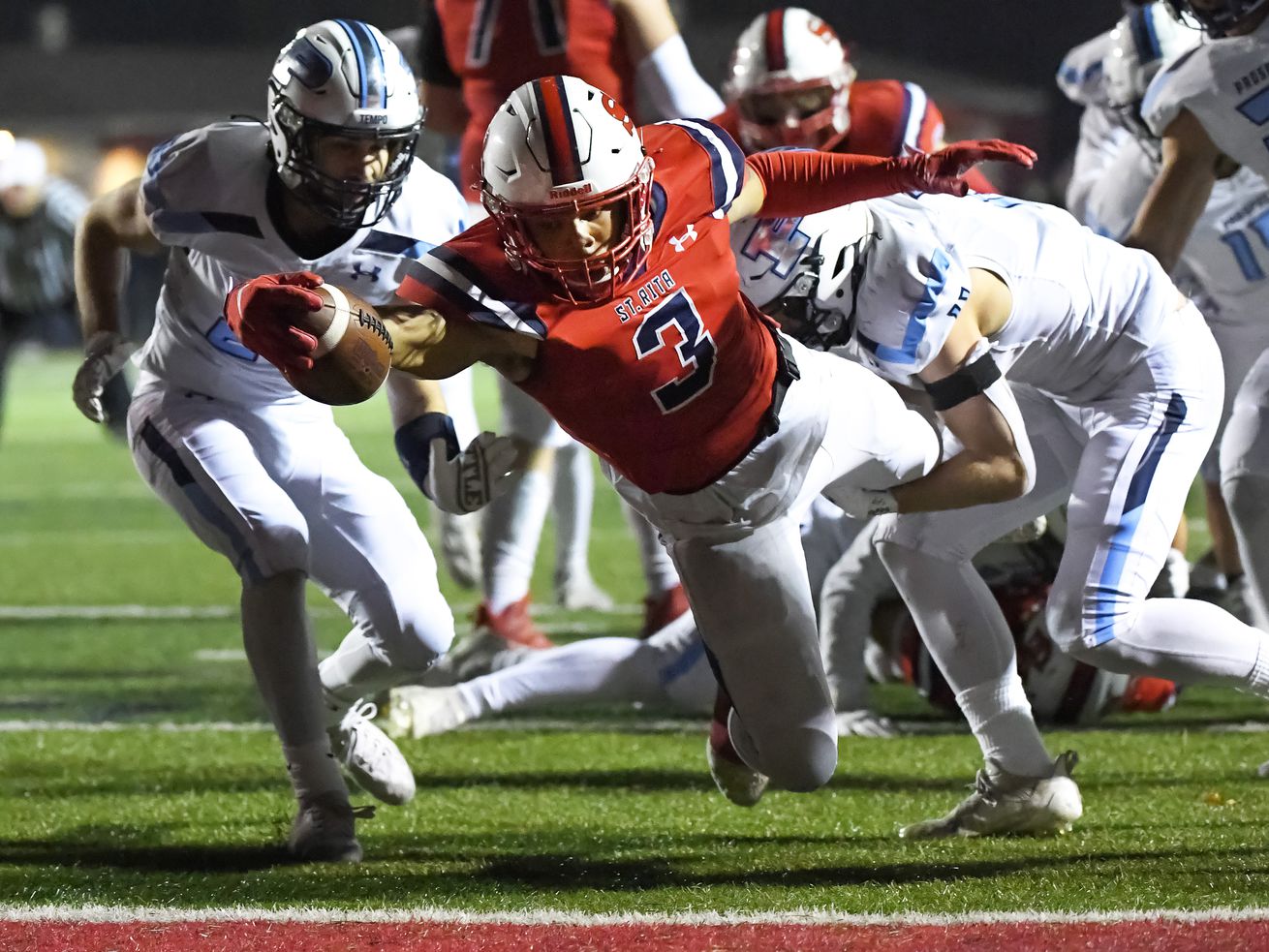 A look at each of the six games involving local teams.

St. Rita’s Kaleb Brown was missed this season. Watching high-level talents is one of the best parts of high school sports.

The Ohio State recruit returned a couple weeks ago. The instant impact he made only underscored what a game-changing force he is.

Will Brown have an AJ Henning-like performance on Saturday and lead the Mustangs to the Class 7A state title?

“I’m glad they held it down without me and now we can do it together, as a team,” Brown said.

Brown injured his left leg early in the first game of the season. He says he had some doubts about returning to play this season, but decided to do it for his teammates.

“This is for my team,” Brown said. “They motivated me. I took care of myself and did what I had to do off the field to get back on the field.”

While Brown was out the Mustangs developed an effective running game behind two sophomores. DJ Stewart is a strong, powerful back and Ethan Middleton is a speedster. Both are averaging more than six yards a carry.

St. Rita’s defense has been excellent since mid-October. Defensive back Johnny Schmitt leads the Mustangs in tackles (77) and interceptions (7).

Wheaton North, which knocked off Brother Rice in the semis, will pose a formidable challenge.

Holy Cross recruit Mark Forcucci has thrown for 22 touchdowns with just three interceptions.. The Falcons have also persevered through an injury. Junior Luke Beedle and sophomore Walker Owens stepped in during the playoffs when running back Brayton Maske went down.

“We don’t have guys with flashy stats defensively but across the board it is a solid group,” Wheaton North coach Joe Wardynski said. “We had to score against Brother Rice and the week before we won 10-3 at Willowbrook so we are capable of winning with different styles.”

How KLLI 93.9 radio won Spanish-language station of the year

Can the Porters defensive line, which Loyola coach John Holecke and Hawks coach Dave Inserra both say is the best in the state, stop Mike Sajenko?

The Maine South running back has scored 30 touchdowns and is averaging seven yards a carry. Sajenko has scored a remarkable 14 touchdowns in the playoffs.

Lockport’s only loss this season came when quarterback Hayden Timosciek was injured. He’s thrown for 2,007 yards in 12 games, with 23 touchdowns and one interception.

Can the Trojans possibly beat mighty East St. Louis? The Flyers’ two losses are to nationally-ranked out-of-state teams. Receiver Luther Burden, the state’s top senior and one of seven major college prospects on the team,, has scored 32 touchdowns.

Expect Cary-Grove to give East St. Louis more of a battle than many expect. The …read more

Golden Globes 2021: The Complete List of Nominees | Entertainment Weekly
Every day is the holiday in Chicago in new Disney movie ‘Christmas Again’

49ers-Vikings halftime report: Garoppolo touchdown pass ties it up at 14

Clippers plagued by turnovers in loss to Golden State