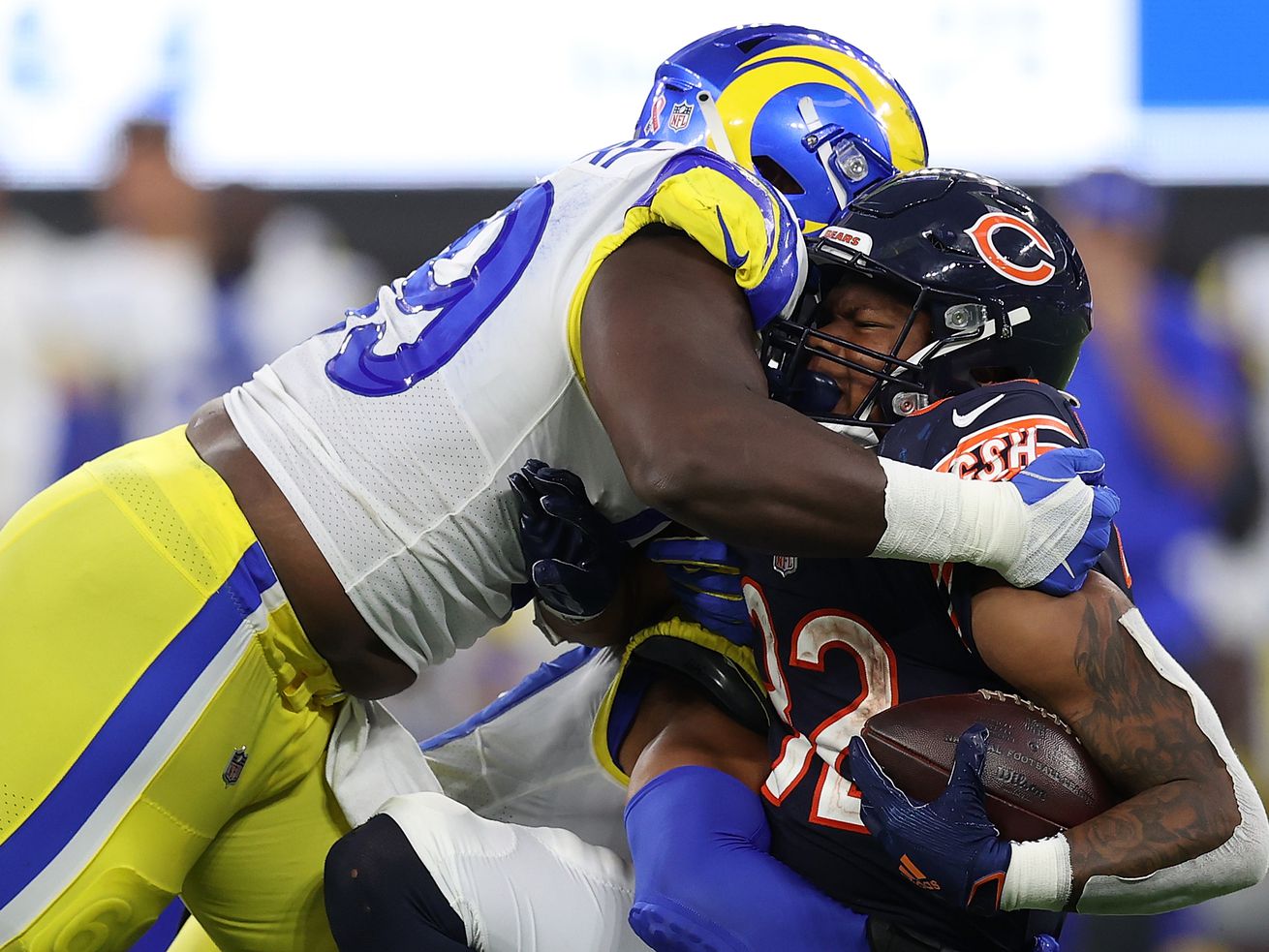 So what if they’re 0-1? So is everyone else in the worst division in the NFL.

Your Bears are right where they want to be — tied for first place in the NFC North!

Yes, they got pounded by the Rams on Sunday, losing 34-14 in that huge new stadium where — yes, sir — they likely will play in the Super Bowl in February.

Why? Because they are tied with the Vikings, Packers and Lions for the NFC North lead. How wonderful!

Of course, all those teams are 0-1. And if they each go 0-17 for the season, we might have a coin flip to see who represents the division in the playoffs.

Come to think of it, however, all four can’t go 0-17 because they play one another twice each and somebody usually has to win.

But the NFC North is looking like a race to the mid-bottom, and the Bears are in the pack.

Indeed, the Bears were so awful with a roly-poly offensive line, invisible defense, bizarre quarterback substitutions, coaching from hell and overall malaise that it’s hard to know what they did well or even with mediocrity.

That was Matthew Stafford, the old Lions quarterback, chopping them up after being freed from Detroit and the four-team division that is the worst in football.

Interesting note about Stafford: While with the Lions, his defense gave up the second-most points per game in NFL history. Now he’s got Aaron Donald, Jalen Ramsey and Co. stopping foes. Free at last!

And here’s something: If you think it’s bad in Chicago, envision the loathing going on in Green Bay after the Packers were roasted by the Saints 38-3, even though Drew Brees is now a TV analyst.

The Packers were a genuine Super Bowl hopeful, led into battle by quarterback hero and three-time NFL most valuable player Aaron Rodgers.

Not only did Rodgers reek in the game, which was played in Jacksonville, Florida, because the Saints were displaced by Hurricane Ida — 15-for-28, 133 yards, zero touchdowns, two interceptions, 36.8 rating — he also has a lingering stench because of his curiously fan-offensive offseason behavior.

Last season, Rodgers walked on water in Wisconsin. This season? Not sure he could float in a baby pool.

The Vikings lost in overtime to kid quarterback Joe Burrow and the Bengals 27-24. And the Lions, well, they’re experts at losing. They got beaten at home 41-33 by the 49ers.

Those poor wretches in Motown have only one playoff victory in the last 58 years. The Lions haven’t even made the postseason in five years. And you wonder why Stafford is happy to restart his career 2,000 miles to the west?

This brings us to the Bears, whom Stafford toyed with Sunday, throwing for 321 yards, three touchdowns, no interceptions and a career-best 156.1 passer rating. Myself, I didn’t know ratings could go that high.

Luckily, the abysmal Bears defense took some of the heat off the …read more

Golden Globes 2021: The Complete List of Nominees | Entertainment Weekly
Father shot at rivals after daughter told him her boyfriend hit her: Prosecutors

Why at-home rapid COVID tests cost so much, even after Biden’s push for lower prices

Australia buys US nuclear subs due to changed security needs

Frumpy Mom: There’s a new Barbie and I want her