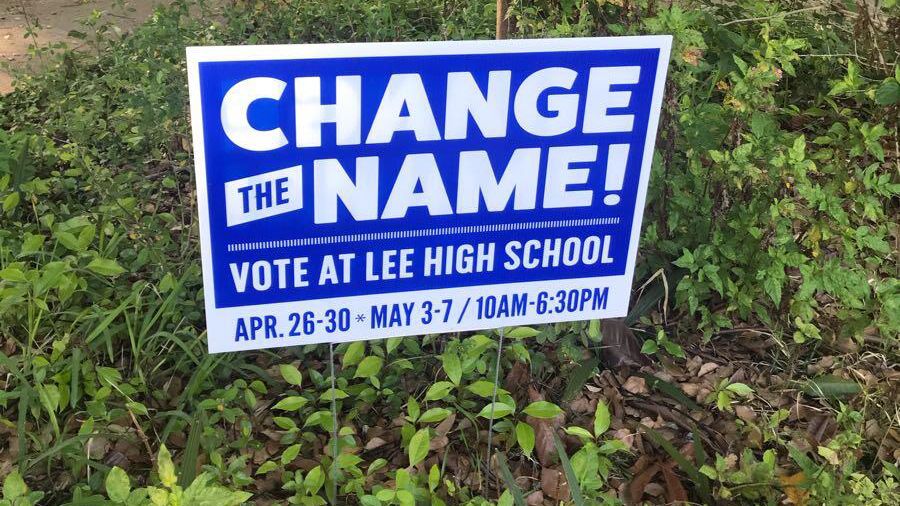 Signs supporting the name change of Robert E. Lee High school are popping up in neighborhoods surrounding the school.

On Monday night, a school advisory committee proposed four alternative names, with the fifth option being to keep the school name the way it is:

If you drive around 5 Points, Riverside and Avondale, you’ll notice signs reading, “Change the Name.”

Ruth Thompson, who supports the name change of Lee High, said she grew up in 5 Points and is a long-time bee keeper in the area. She has a sign posted in her yard. Thompson’s daughter is a 2008 graduate of Lee High.

“I used to hate going into the school and see the big general on his horse and to me it was very dark, and I was just like, ‘This name has to go,’” said Thompson.

Thompson got her sign from the Northside Coalition. Rain Dogs in 5 Points said it’s also handing out the signs.

“How can you be proud of the name of your school if you’re a person of color and this is a person that actually or the people white supremacy it’s just furthering that and making it that acceptable, but it’s not,” said Thompson.

But not all agree on changing the name — voicing a desire to preserve history and calling attention to the price tag. Every Tuesday those in opposition are rallying outside the school.

Quisha King, who chose for her daughter to attend Lee next year, told News4Jax the “drama and trauma” is taking away from what kids should be focusing on — education.

“The message that I hear at the meetings is that this name change prevents them from accomplishing their dreams, and I think that’s such a dangerous message,” said King.

King has attended the community meetings and sees a community divided, which she said is ultimately affecting the students’ learning.

“It wasn’t a concern for the children before the adults brought in all of this drama, and I think we’re bringing kids into a beef, to put it frankly, an old beef that doesn’t belong here,” said King.

Those eligible to vote on the name change include:

Those results will then be submitted to the superintendent who will make a final recommendation to the school board, which will have the final say.