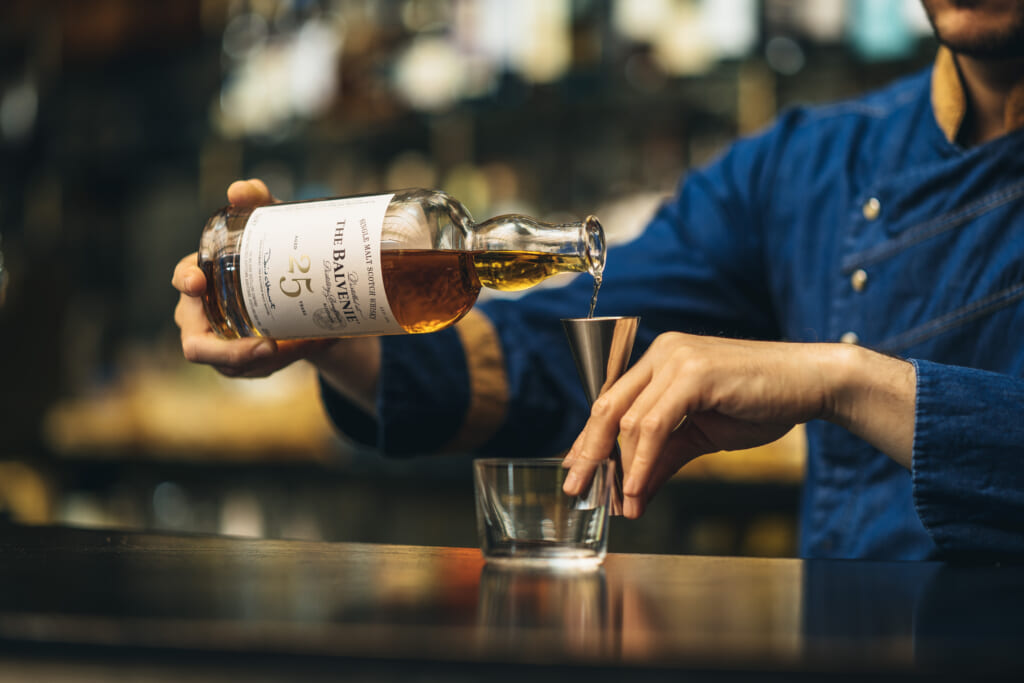 The Balvenie is famed for a litany of reasons, but perhaps most for their esteemed Master Of Malt David C. Stewart. Stewart is so renowned he’s earned an MBE (Most Excellent Order of the British Empire)—a prominent British title of chivalry and accomplishment—from the Queen of England and is now the longest standing Malt Master in the whisky world, celebrating 60-plus years of service.

Perhaps the Speyside distillery’s second most renown trait is Stewart’s pioneering work in double wood aging that established The Balvenie among the world’s best. This “second finishing” in barrels of port, Madeira, rum, sherry, etc. is now all but standard in the whisky world, across categories.

Recently Brand Ambassador Naomi Leslie walked us through a tasting of The Balvenie Twenty-Five, introducing us to the impeccably smooth, relatively high ABV (48%) exquisite single malt. Leslie took time to underscore what she and The Balvenie take most pride in are the pillars of The Balvenie brand, what they dub the “5 Rare Crafts.”

“We call them the 5 Rare Crafts, and it’s kind of the things that we focus the most on,” she explained, elaborating on each: 1. Stressing how they grow all their own barley at the Balvenie farm; 2. Malt on-site on their own malting floor (one of only a handful left in Scotland); 3. Build every single one of their hand-hammered copper stills on-site, with their own team of coppersmiths upkeeping them; 4. Keep their own cooperage to craft and repair all their own casks.

“Every distillery has to utilize a cooperage, but the rare thing is to have our own dedicated just to us—because most cooperages service dozens of distilleries,” Leslie reminds us. She reveals she had to work in the cooperage—and every other aspect of whisky making—as training for becoming Brand Ambassador. “The coolest thing is our own hands are on every single barrel that we use for our whisky.”

And the last Rare Craft, 5: their beloved Malt Master David C. Stewart, MBE. Stewart himself handpicked some of The Balvenie’s oldest and rarest whiskies, the absolute youngest aged for a quarter of a century, to create the Twenty-Five, what they dub “A perfectly balanced liquid showcasing the essence of luxury and premium through the experience of various flavors. The exceptional 25-year-old holds extraordinary depth, with tastes of bold vanilla oak, crystallized ginger, and sweet runny honey.”

To us the exceptional smoothness of The Balvenie name was most prominent, especially for a nearly 100-proof whisky. Subtle notes of marshmallow, vanilla, oak and long traces …read more

Golden Globes 2021: The Complete List of Nominees | Entertainment Weekly
Am I required to have a lifeguard for my backyard pool? Ask the lawyer

Land shark? Why more shark encounters are likely coming and how “humans are not on the menu”