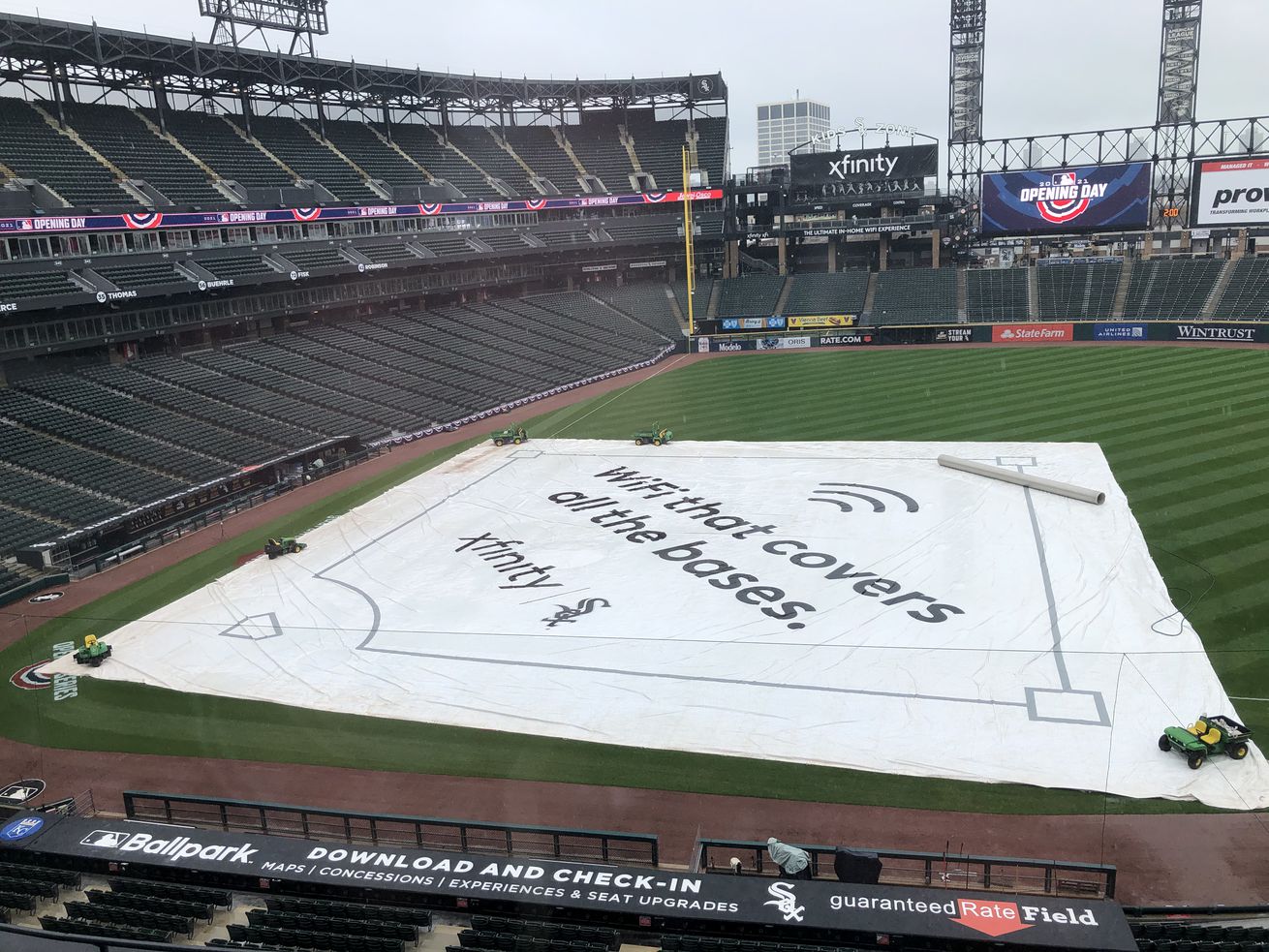 The infield at Guaranteed Rate Field is covered on Thursday before the White Sox home opener. | Daryl Van Schouwen/Sun-Times

Right-hander Lance Lynn is scheduled to start against the Royals’ Brad Keller.

The start of the White Sox home opener against the Royals is being delayed due to rain.

The team announced the delay before it started to rain, about 40 minutes before the 3:10 start time, and by 3 p.m. rain was soaking Guaranteed Rate Field. The Sox said rain was expected for at least another hour but the team was “still optimistic” about getting the game in.

It rained much of the morning and early afternoon around the ballpark but it was not raining when the announcement was made, and the tarp, which had been pulled off the field, was put back on.

Right-hander Lance Lynn is scheduled to start against the Royals’ Brad Keller.

Here is the Sox lineup:

Prior to the game, Billy Hamilton was placed on the 10-day injured list with a left hamstring strain, the third Sox player to go on the IL with a hamstring problem just one week into the season.

Hamilton, a backup outfielder signed during spring training who started in left field against the Mariners on Wednesday, left in the sixth inning after straining his hamstring while stealing third base.

Tim Anderson went on the IL Wednesday with a left hamstring strain and Adam Engel injured his during spring training and is on the IL.

“I feel good so far,” Anderson said Thursday. “Feel like I’m at 85 percent. I’ve been running, been feeling great, been able to get up to speed a little bit. Each day feeling better so that’s a positive.”

With Hamilton, Engel and Eloy Jimenez (pectoral muscle tear) sidelined, the Sox outfield core is thinning rapidly. They called up Nick Williams from Schaumburg and moved left-hander Jace Fry to the 60-day IL.

With Leury Garcia experienced leg tightness, per manager Tony La Russa, Williams is in the starting lineup for the home opener against the Royals Thursday.

Panerai’s New Submersible Is Its Most Eco-Conscious Watch Yet