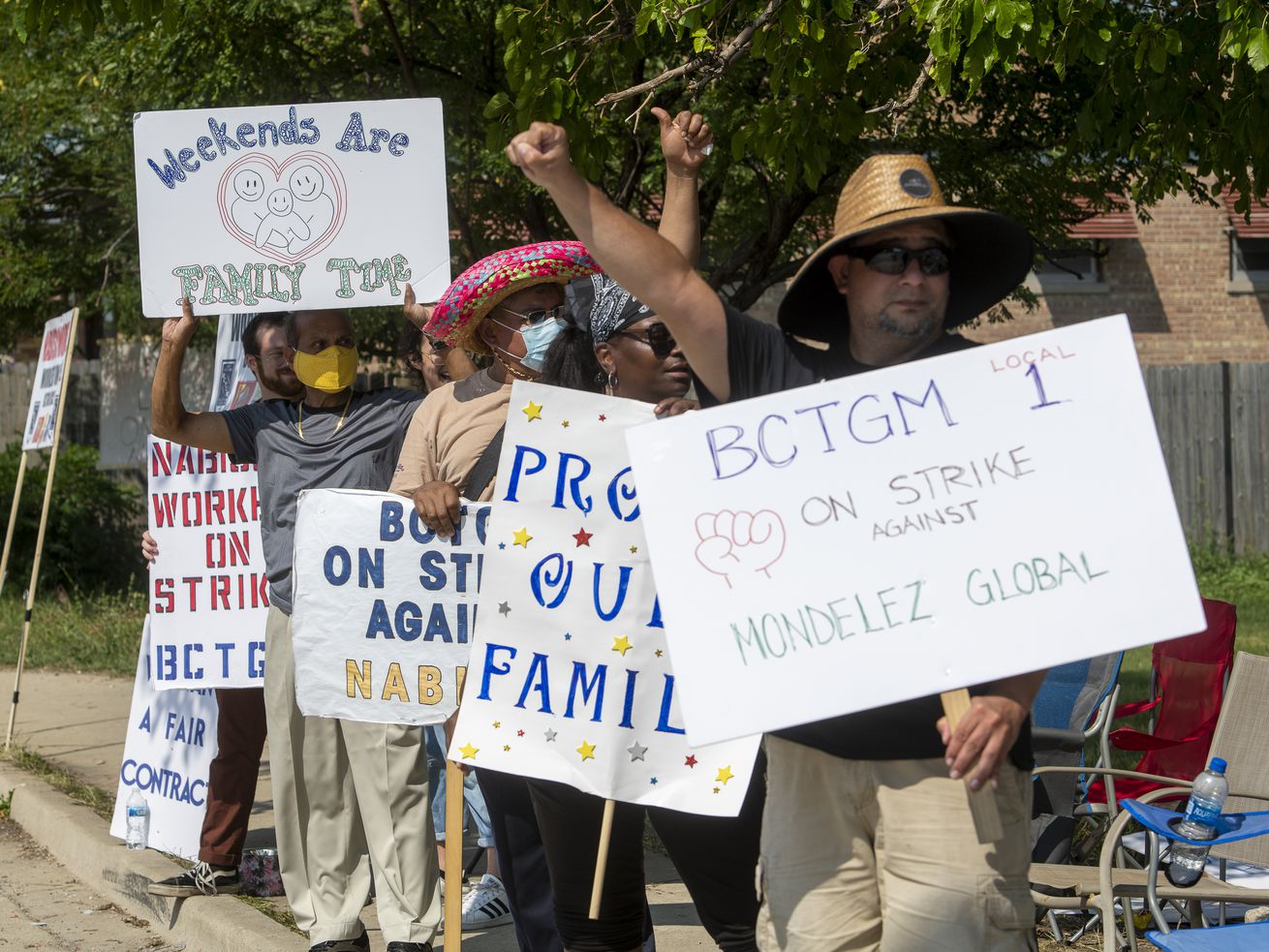 Union members picket outside the Nabisco plant on the city’s Southwest Side on Aug. 27. | Tyler LaRiviere/Sun-Times file

A tentative agreement between Mondelez International and members of the Bakery, Confectionery, Tobacco Workers and Grain Millers International Union could end a walkout involving a bakery at 7300 S. Kedzie Ave.

Mondelez International and a union said Wednesday they have reached a tentative agreement that could end a strike against the company’s Nabisco operations.

The walkout by members of the Bakery, Confectionery, Tobacco Workers and Grain Millers International Union started in August and has affected six locations nationwide, including the Chicago bakery at 7300 S. Kedzie Ave. and a distribution site in Addison.

Both sides said a ratification vote by union members will occur in a few days, once information about the proposal is circulated. Picketing will continue until an agreement is ratified. A striking worker in Chicago said a vote may occur Friday.

Union President Anthony Shelton said in a statement that an agreement was reached “very late” Tuesday night. It came after a concentrated two-day period of bargaining. The union has said the strike involved about 1,000 workers in the U.S., about 345 of them in the Chicago area.

Neither the company nor the union would discuss terms in the proposal.

“I want to thank and commend all of the members of the bargaining committee for their many, many hours of extremely hard work to reach this tentative agreement. As always in our union, the members will have the final say on the contract,” Shelton said. In August, he joined the Chicago workers on the picket lines, praising their solidarity.

A statement from Mondelez spokeswoman Laurie Guzzinati emphasized that the tentative agreement is “fully recommended” by both sides.

Chicago’s Catch Co. on the go: From Series B funding to its first acquisition to the Bassmobile

The strike started in Portland, Oregon, and spread within days to the Chicago area, a bakery in Richmond, Virginia, and distribution locations in Colorado and Georgia. Issues included company proposals to curtail health benefits for new hires and an alternative schedule for 12-hour days for high-volume production lines.

Mondelez, insisting it wanted to modernize contract language written decades ago, made concessions in an offer it publicly posted Aug. 31. It included a modified work schedule proposal and a bonus of $5,000 per employee, annual wage increases for each year of a four-year contract and increases to the company’s 401(k) match. It’s not known if those terms are in the tentative deal.

Strikers and their supporters have claimed fewer people are buying Oreos because of a union-backed boycott. Guzzinati has said the company has seen no sales impact for its popular cookie.

Golden Globes 2021: The Complete List of Nominees | Entertainment Weekly
No jail for trooper who arrested neighbor during dispute triggered by car alarm

2 wounded in unrelated shootings a block apart in South Loop