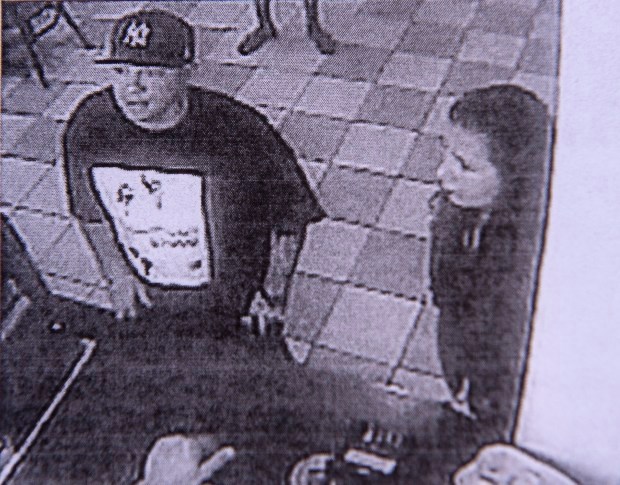 The suspect in a deadly shooting at a Kentucky Fried Chicken restaurant in Northridge on New Year’s Eve in 2017 was found hiding in Mexico and brought back to the United States this week, according to the Los Angeles Police Department and the FBI.

Derek Bryan Dominguez, 31, fought with U.S. and Mexican law enforcement agents but was eventually taken into custody when they raided a residence he was staying at in Rosarito, a beach town south of Tijuana on Tuesday, FBI spokeswoman Laura Eimiller said.

“He put up a fight when arrested,” she said.

That’s when Dominguez pulled out a gun and shot Reyes multiple times, killing him, the FBI said.

The FBI release on Thursday provided new details about the three-year-old shooting. Initially, LAPD detectives said they thought Dominguez made eye contact with Reyes, not the other man.

Former LAPD Detective Ryan Verna, who has since retired, spoke in front of the Valley Bureau’s Devonshire station after the killing. He called the apparent motive “simple” and “ridiculous.” He said the shooting followed a perceived slight.

Verna said Dominguez had connections to gangs in the Valley, but the shooting did not appear to be over a gang dispute.

The arrest of Dominguez also brings to an end the mystery of where he fled after the killing. A state search warrant for his arrest was issued in January 2018. A few weeks later, federal agents issued a warrant and began looking for him.

At the time, LAPD detectives believed Dominguez was still in the L.A. region as they searched for him. Verna said the man had ties to the San Fernando Valley, the Antelope Valley and Bakersfield. The detective said he did not think Dominguez had fled to Mexico.

The FBI said Thursday that Dominguez left the U.S. soon after the killing. How long he spent in Rosarito, a popular vacation spot for U.S. tourists featuring beach views and nightlife, was not clear.

Eimiller said investigators were still looking into whether Dominguez was staying with anyone in Mexico. In previous cases where the FBI tracked down suspects to Mexico, federal prosecutors have gone after people who helped the suspects escape.

Dominguez’s girlfriend, 28-year-old Mallely Espinoza, was arrested about a month after the shooting. LAPD detectives accused her of being an accessory to Reyes’ killing. However, information about any charges brought against her were not immediately available.

After his arrest, agents with the FBI’s fugitive task force brought Dominguez back to L.A. the same day. He was booked in jail …read more