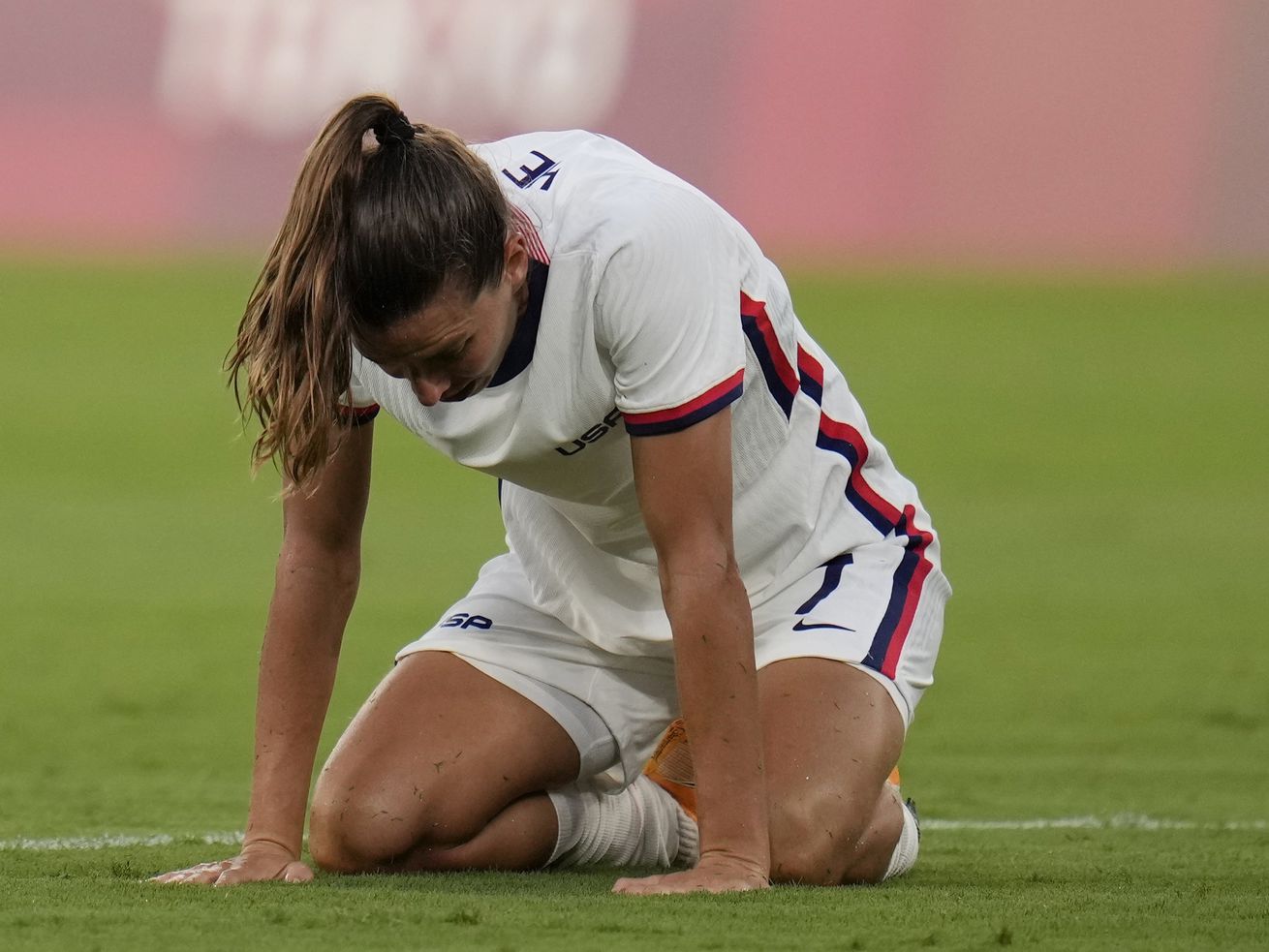 The United States’ Tobin Heath kneels on the field after her team lost 3-0 to Sweden in their opening match at the Tokyo Olympics on Wednesday. | Ricardo Mazalan/AP

The Americans, ranked No. 1 in the world and the favorites to win gold in Tokyo, were riding a 44-match unbeaten streak heading into the match.

TOKYO — Sweden didn’t have to bunker down on defense against the Americans this time.

Stina Blackstenius scored a pair of goals and the Swedes stunned the United States at the Olympics with a 3-0 victory Wednesday in the women’s soccer tournament.

The Americans, ranked No. 1 in the world and the favorites to win gold in Tokyo, were riding a 44-match unbeaten streak heading into the match. But Sweden, ranked No. 5, has been the U.S. team’s nemesis of sorts in recent years. The Swedes bounced the Americans from the 2016 Rio de Janeiro Games in the quarterfinals, the earliest U.S. Olympic exit ever, by making a defensive stand.

This April, Sweden played the United States to a 1-1 draw in Stockholm, which snapped a winning streak dating back to January 2019 when the Americans lost to France in the run-up to the World Cup. It was the U.S. team’s only draw this year.

“Did we expect this result tonight? No,” said U.S. forward Megan Rapinoe, who did not start but came on as a substitute in the 64th minute with the score 2-0. “It’s frustrating, and it’s frustrating that it’s Sweden. They found a lot of space on us. I don’t even know how many goals we have given up this whole year. I don’t remember the last time we gave up a goal. So to give up three is not great.”

Sweden’s offense deserved all the credit. Blackstenius’ header into the far corner off a cross from Sofia Jakobsson in the 26th minute gave the team a first-half lead.

The United States, which came out stale, had its best chance of the opening half in the final moments when Rose Lavelle’s shot hit the post. Coach Vlatko Andonovski made changes for the second half, subbing in Carli Lloyd for Alex Morgan and Julie Ertz for Sam Mewis.

But Blackstenius scored again in the 54th minute, beating goalkeeper Alyssa Naeher, as the Americans continued to struggle. Lina Hurtig added the final goal in the 72nd.

Sweden goalkeeper Hedvig Lindahl acknowledged the win over the favorites was encouraging, but it’s still just the beginning of the tournament. Ahead are group games against Australia and New Zealand.

“I know for a fact that you can go very far in a tournament even if you lose to the USA or whoever you play in the first game,” Lindahl said. “So in the end I don’t know how much it means, but for sure we showed the world and ourselves that we can play well against a team like the U.S. or any team.”

The loss was the first for the United States under Andonovski, who took over when former coach Jill Ellis stepped down following the …read more