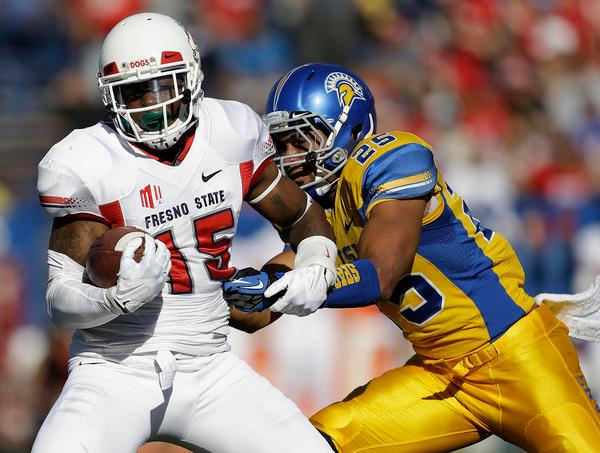 Here’s a look at some of the significant games in the San Jose State-Fresno State rivalry over the past 35 years.

1986: San Jose State 45, Fresno State 41 — Mike Perez outdueled Heisman hopeful Kevin Sweeney, throwing for 433 yards. The teams scored 38 points in the fourth quarter and combined for 1,072 yards of offense in the game. SJSU went on to the California Bowl and routed Miami (Ohio) 37-7.

1990: San Jose State 42, Fresno State 7 — Fresno State was going for its third straight conference title, but two TD runs by Leon Hawthorne and Paul Franklin’s 24-yard interception return for a TD put this one away by halftime. SJSU then beat Central Michigan 48-24 in the California Bowl.

1999: Fresno State 63, San Jose State 12: The Bulldogs’ 51-point win still stands as the largest margin of victory in the series’ 83-game history. After the game amid rumors that he would be dismissed, then-Spartans coach Dave Baldwin said, “it’s the coach’s fault when we’re not tackling and stopping people. I’ve still got another year on my contract, so we’ll have to see what happens.”

Asia Today: India reports over 44,000 cases, most in Delhi

2000: Fresno State 37, San Jose State 6 — With an invitation to the inaugural Silicon Valley Classic on the line, Fresno State got the bowl bid. The Spartans had beaten then-No. 9 TCU earlier in the season, but lost their last two games and missed an opportunity to play in the postseason for the first time since 1990. Less than two weeks later the Fresno State game, Baldwin was out of a job, as he and SJSU’s administration could not come to terms on a new contract.

2002: Fresno State 19, San Jose State 16 — Kicker Asen Asparuhov made four field goals, including the 27-yard game-winner with just over six minutes left, as the Bulldogs earned their third consecutive trip to the Silicon Valley Classic. Nick Gilliam kicked three field goals for San Jose State, which went 6-7 and was again denied its first bowl bid since 1990. “We’re all hurting right now,” then-Spartans coach Fitz Hill said. “We had an opportunity and let it slip away.”