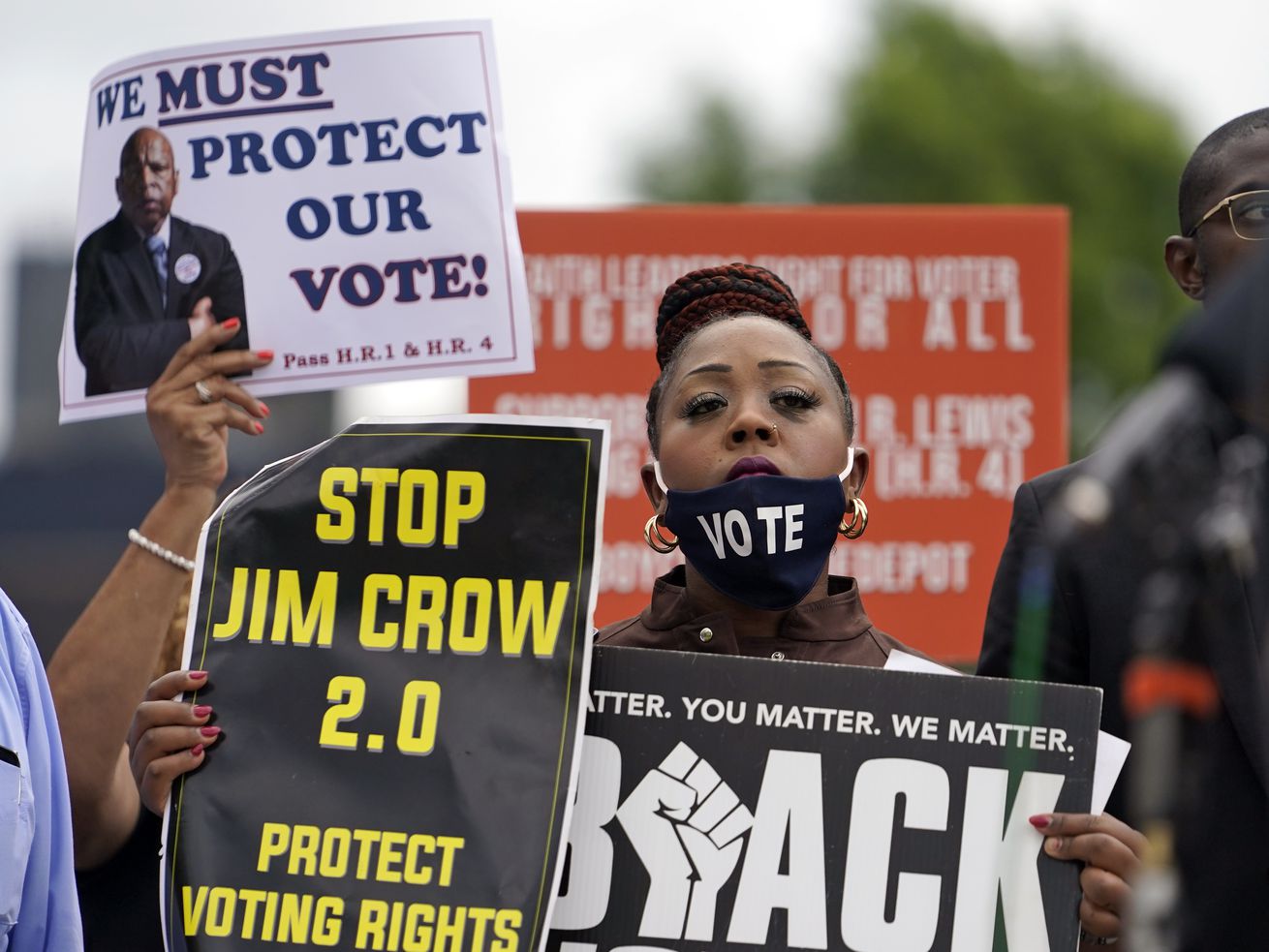 A voting rights rally near the Georgia State Capitol in Atlanta on June 8, 2021. | AP Photos

A supermajority should be required to decertify any state’s electoral votes, not just a simple majority as the law now permits.

When Sen. Joe Manchin announced he would oppose the For the People Act, Steve Benen of MSNBC spoke for many Democrats when he declared that “Joe Manchin is prepared to be remembered by history as the senator who did little more than hope as his country’s democracy unraveled.”

One can share Democrats’ alarm about the state of our democracy without concluding that the For the People Act was the answer.

H.R. 1 is a mashup of sound ideas (requiring a paper record of each vote) with outdated and arguably unconstitutional measures — banning so-called dark money at a time when small-dollar donations are more important; and limiting speech, which the American Civil Liberties Union, among others, opposes.

Some are now saying the Democrats should turn to the John Lewis Act as a response to Republican efforts to curtail voting rights in the states. But the Lewis Act is off-point, too.

Look, Republican efforts to limit early and absentee voting are destructive because they ratify the Big Lie that the 2020 election was stolen. These laws deserve the strongest condemnation, and Democrats would be justified in running ads reminding voters that Republicans were acting in bad faith.

But not all of the measures in these laws are objectionable. Requiring an ID strikes many people as simple common sense. An Economist/YouGov poll in April found that 64% of Americans agreed with the statement: “Photo ID should be required to vote in person.” Among African Americans, 60% agreed. Democrats should not die on this hill.

Moreover, the far more pressing emergency is the Republican Party’s loosening attachment to democratic procedures and to truth itself. As we saw in the aftermath of 2020, 147 Republican officeholders were willing to decertify the Electoral College count. A few brave local Republican officials resisted tremendous pressure to alter or misreport the results of elections. They demonstrated integrity. For their trouble, instead of being lauded and celebrated as heroes of democracy, they have been censured by GOP committees across the country as the legend of the Big Lie has seized the minds of rank-and-file Republicans.

The Republican Party is barreling toward disregarding the actual vote count in a presidential contest. The John Lewis Act does not address this.

There is something Democrats can do at the federal level to respond to the threat: They can amend the Electoral Count Act of 1887. Republicans would be unlikely to filibuster this law, so Democrats can pass it with a simple majority vote.

This law was passed following the contentious Hayes-Tilden election in 1876 — a contest that was so close it threatened to tear the country apart just 11 years after Appomattox. Here is a sample of its brilliant draftsmanship: