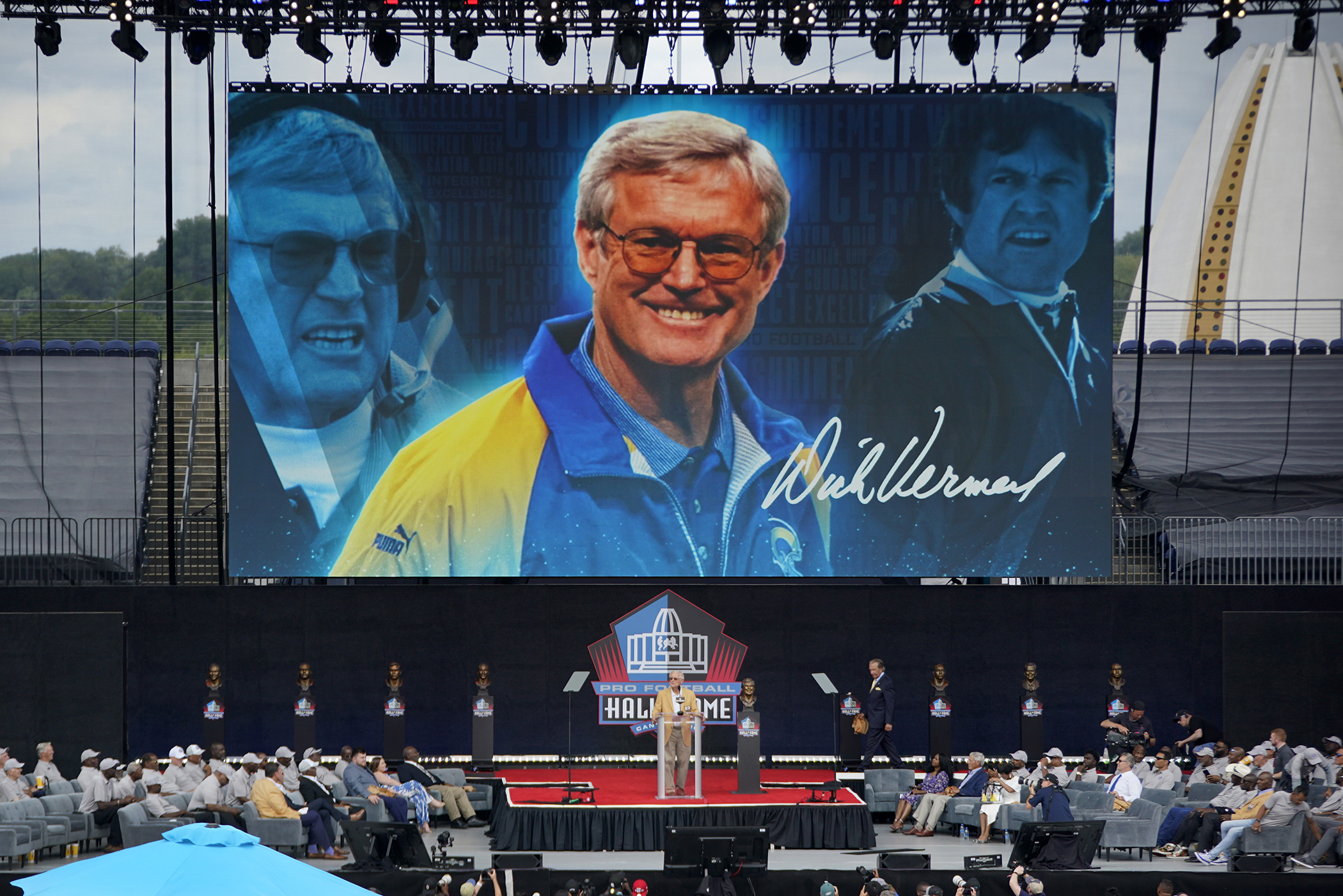 CANTON, Ohio (AP) — Tony Boselli looked out at all the teal-colored jerseys in the crowd and screamed: “Duuuuval!”

Finally, the Jacksonville Jaguars have a player in the Pro Football Hall of Fame.

Boselli, the first pick in Jaguars history after being a threee-time All-American at USC, was among eight members of the Class of 2022 enshrined Saturday at Tom Benson Hall of Fame Stadium.

“I thank God for football and I thank God for the people of Jacksonville,” Boselli said before shouting the fans’ rallying cry, the name of their county.

The Jaguars played the Las Vegas Raiders in the NFL preseason opener Thursday night, so No. 71 Boselli jerseys filled the seats.

A five-time Pro Bowl selection and three-time All-Pro left tackle in seven seasons in Jacksonville, Boselli saw his career cut short by injuries. But his dominant performance earned him a gold jacket.

The class inducted Saturday included to others with significant Southern California connections.

Coach Dick Vermeil was an assistant with the Los Angeles Rams from 1969-73 and was head coach a year at UCLA in 1974 before going on to win a Super Bowl as head coach of the St. Louis Rams. Wide receiver Cliff Branch played 14 seasons with the Raiders, winning three Super Bowls. He played on Los Angeles Raiders teams from 1982 to 1985.

Linebacker Sam Mills, defensive back LeRoy Butler, defensive linemen Bryant Young and Richard Seymour and longtime head of officiating Art McNally joined Boselli, Vermeil and Branch in a class of guys who waited several years — some decades — to get the call.

Young delivered the most emotional speech when he broke down honoring his son, Colby, who died of pediatric cancer at age 15 in 2016.

“We assured Colby we would keep his memory alive and we would continue speaking his name,” Young said. “Colby, you live long in our hearts.”

Young, who excelled at defensive tackle in an era filled with talented players at the position, had 89 1/2 sacks and earned four Pro Bowl selections in a 14-year career spent entirely with the San Francisco 49ers.

Vermeil gave the longest speech, blowing past the 8-minute limit by 15. The former Philadelphia Eagles, St. Louis Rams and Kansas City Chiefs coach seemed to thank everyone who helped him reach the stage.

Where are California’s weakest housing markets?