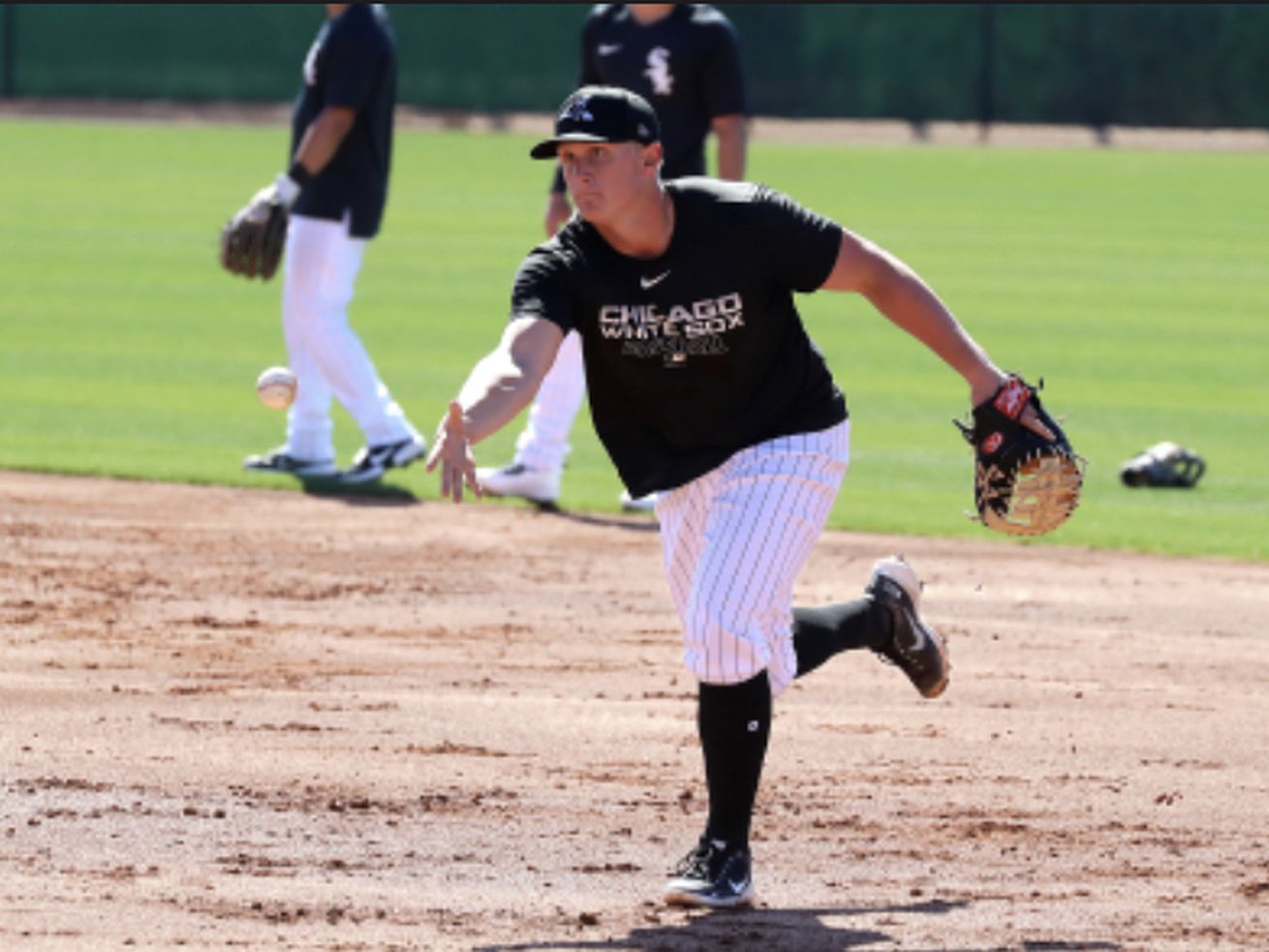 Andrew Vaughn goes through fielding drills at first base at White Sox spring training camp Monday. | For The Sun-Times/Jon Antonoff

GLENDALE, Ariz. — The White Sox didn’t sign or trade for anyone this offseason to be their designated hitter, and barring an acquisition this spring, it has looked like rookie Andrew Vaughn will be their Opening Day designated hitter for some time now.

The latest show of support came from Tony La Russa on Tuesday, although the manager said Vaughn’s name is in pencil, not ink. Which is what you might expect a manager to say of a player who has 55 minor league games under his belt, none higher than advanced Class A Winston-Salem.

“Probably the three most important things a hitter has to have,” La Russa said of Vaughn, who will turn 23 two days after Opening Day. “First of all, if it’s in a cage or if he’s taking live batting practice — and I’m sure it would be the same in a game — he doesn’t ever step in there where he’s not ready to do damage. He’s got that hitter-ish attitude.

“Second, he’s got no fear. And third, he works left-center, right-center, which is what high-average hitters do, produce a lot of RBIs, a lot of home runs, they start a lot of rallies.

“In other words, what I’m saying is, very impressive.”

La Russa mentioned first baseman Gavin Sheets and third baseman Jake Burger as other possibilities and neither of them, while well regarded as good prospects, have major league experience.

What La Russa wants is for Vaughn, a first baseman who has worked at third base and even in the outfield in camp to potentially expand his value, to earn the job. Vaughn made a strong case, player development director Chris Getz said recently, by demonstrating professional at-bats during the team’s summer camp at Schaumburg where he faced pitchers with major league experience.

“Getting to see that pitching was a huge benefit to just get to see that level that those guys bring,” Vaughn said Tuesday. “Everybody throws hard these days. And the guys at the major league level, they can pinpoint. You have to be within yourself. Get my pitches, take my at-bats, take every pitch very seriously. It helped me a lot.”

The 6-foot, 215-pound Vaughn was drafted third overall in 2019 and is the Sox’ highest-ranked prospect at No. 14 by MLB Pipeline. He has 18 games of the DH experience in the minor leagues.

“I was taught this a few years ago, you have to play it like you are in a position,” Vaughn said. “You can’t be a guy who takes his at-bats, takes his gloves off and just goes and sits …read more

Mars rover’s giant parachute carried a secret message – but what did it say?

Not to be sniffed at: Agony of post-COVID-19 loss of smell