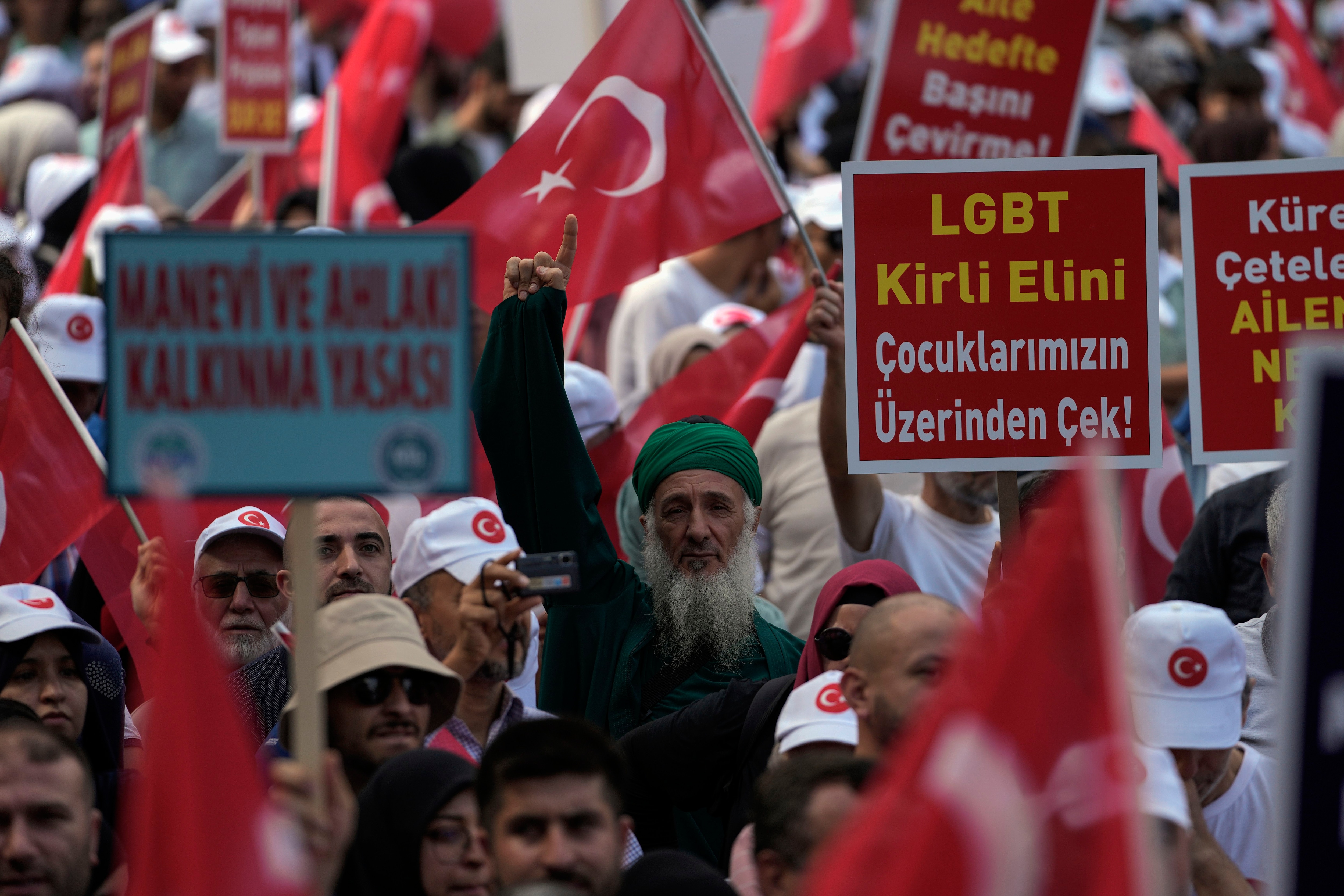 The 25-year-old translator by day and trans drag performer by night felt overwhelming panic and anxiety when several thousand demonstrators gathered and marched Sunday in Turkey to demand a ban on what they consider gay propaganda and to outlaw LGBTQ organizations.

The Big Family Gathering march in the conservative heart of Istanbul attracted parents with children, nationalists, hard-line Islamists and conspiracy theorists. Turkey’s media watchdog gave the event the government’s blessing by including a promotional video that called LGBTQ people a “virus” in its list of public service announcements for broadcasters.

“We need to make all our defense against this LGBT. We need to get rid of it,” said construction worker Mehmet Yalcin, 21, who attended the event wearing a black headband printed with Islam’s testimony of faith. “We are sick of and truly uncomfortable that our children are being encouraged and pulled to this.”

Seeing images from the gathering terrified Willie Ray, the drag performer who identifies as nonbinary, and Willie Ray’s mother, who was in tears after talking to her child. The fear wasn’t misplaced. The Europe branch of the International Lesbian, Gay, Bisexual, Trans and Intersex Association ranked Turkey second to last, ahead of only Azerbaijan, in its most recent 49-country legal equality index, saying LGBTQ people endured “countless hate crimes.”

“I feel like I can be publicly lynched,” Willie Ray said, describing the daily sense of dread that comes with living in Istanbul. The performer recalls leaving a nightclub still in makeup on New Year’s Eve and hurrying to get to a taxi as strangers on the street called out slurs and “tried to hunt me, basically.”

Sunday’s march was the biggest anti-LGBTQ demonstration of its kind in Turkey, where civil rights for a community more commonly referred to here as LGBTI+ — lesbian, gay, bisexual, transgender, intersex and other gender identities and sexual orientations — have been under assault in the years since an estimated 100,000 people celebrated Pride in Istanbul in 2014.

In a visible sign of the shift, the anti-LGBTQ march went ahead without any police interference. Conversely, LGBTQ groups have had their freedom to assemble severely curtailed since 2015, with officials citing both security and morality grounds.

Police used tear gas and water cannons to disperse the Pride march planned for that year. Government officials have since banned the event. Activists have tried to gather anyway, and more than 370 people were detained in Istanbul in June.

President Recep Tayyip Erdogan’s views also have grown more stridently anti-LGBTQ over time. Before the 2002 election that brought the Justice and Development Party (AKP) he co-founded to power, a younger Erdogan said at a televised campaign event that he found mistreatment of gay people inhumane and legal protections for them in Turkey a “must.”

“And now, 20 years into this, you have an entirely different president that seems to be mobilizing based on these dehumanizing, criminal approaches to the LGBTQ movement itself,” said Mine Eder, a political science professor at Bogazici University in Istanbul.

Kentucky school shooter could walk free, or stay behind bars