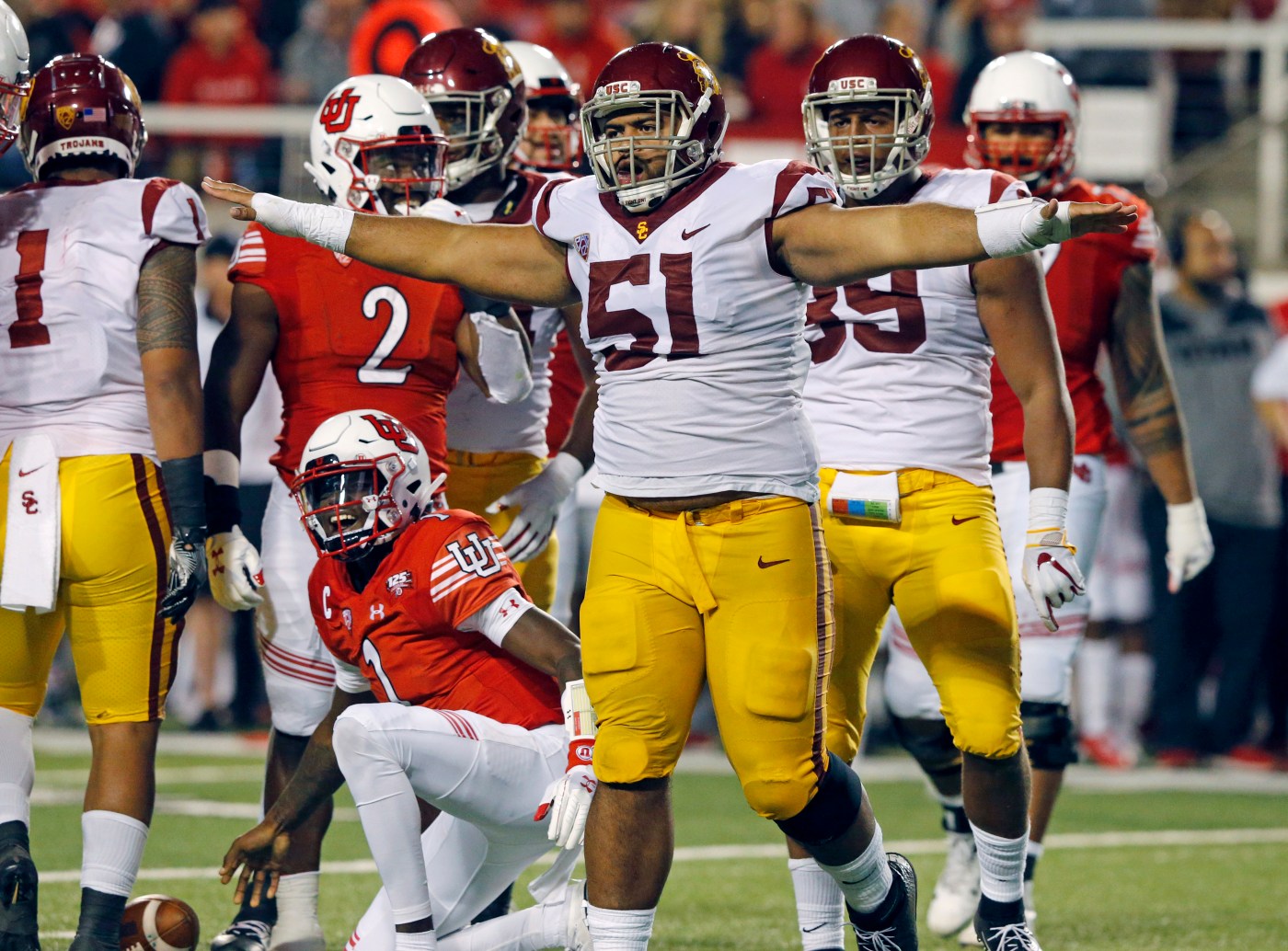 Marlon Tuipulotu continued his monster season in the first half of USC’s game against Utah Saturday night.

On first-and-10 from the Utah 15 early in the second quarter, the senior defensive tackle shoved aside his blocker, got past the man and swallowed up Utah quarterback Cameron Rising. Tuipulotu punched the football loose, and defensive lineman Connor Murphy jumped on it at the Utah 4.

Tuipulotu has stepped up in a big way since fellow defensive tackle Jay Tufele opted out to prepare for the NFL Draft. Tuipulotu had eight tackles in each of the first two games this season, leading the Trojans in the category through two weeks.

His strip sack on Saturday was one of three forced turnovers by the Trojans in the first half. Outside linebacker Drake Jackson intercepted a pass in the first quarter, then safety Isaiah Pola-Mao jumped on a botched hand-off to give USC its second fumble recovery.

But the Trojans weren’t very clean on the turnover front themselves in the first half. USC quarterback Kedon Slovis was sacked three minutes into the second quarter and could not hold onto the ball. Safety Nephi Sewell scooped the ball up and returned it 23 yards for a touchdown.

Then after the Pola-Mao fumble recovery, Slovis tried to throw to tight end Erik Krommenhoek. But the ball sailed softly behind the senior, and Sewell intercepted it, Slovis’ second pick of the year.

It didn’t do much to silence the questions about Slovis’ arm strength and accuracy through the first two weeks of the season, but he did get some redemption on the next drive by passing to Krommenhoek for a touchdown and a 14-point lead, the Trojans’ first two-possession lead of the year.

USC’s leading rusher, Markese Stepp, was in street clothes for the game due to what was reported on the USC radio broadcast as an upper body injury. Stepp had 26 carries for 135 yards and two touchdowns through the first two games of the season.

Defensive tackle Brandon Pili was back in action in the game after missing the first two games of the season due to a broken finger. Center Brett Neilon also returned to play after missing the Arizona game with an ankle sprain.

Linebacker Palaie Gaoteote IV did not play after being in concussion protocol all week.

USC football might have its best chance to win at Utah

No. 20 USC at Utah: TV info, scouting report and prediction