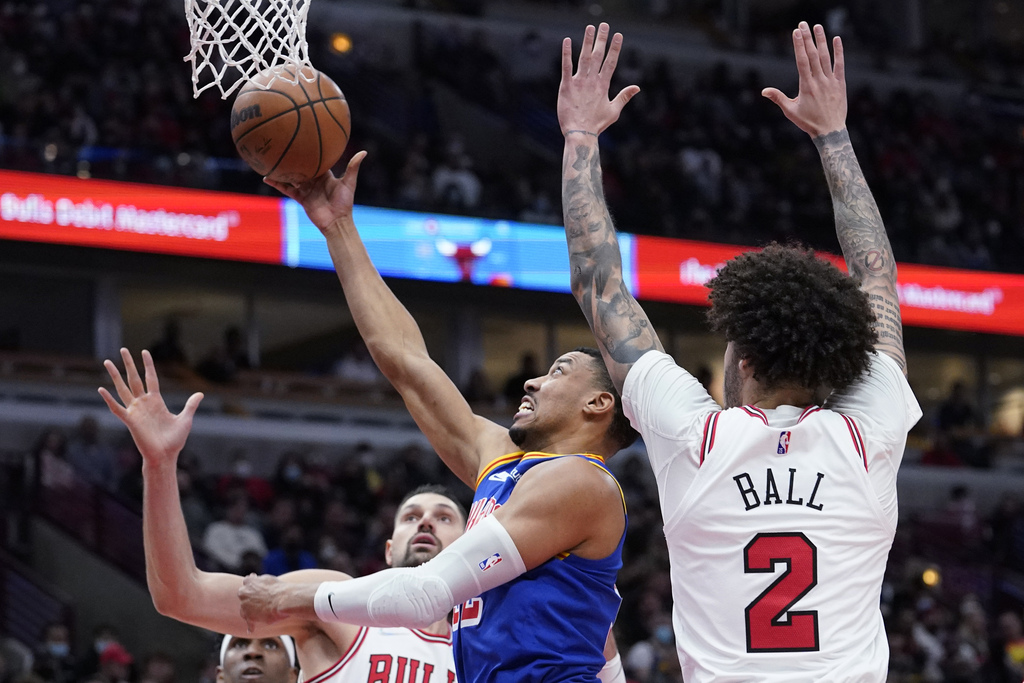 CHICAGO — Steve Kerr and Co. dismissed their blowout loss to the Milwaukee Bucks as a flash in the pan, one game of 82, just a bad night. It took only 24 hours for those assessments to prove accurate. On Friday, it was the Bulls’ turn for a bad night.

Golden State got big contributions from rookie Jonathan Kuminga, Andrew Wiggins and Jordan Poole to make up for the absences of Draymond Green, Klay Thompson and Gary Payton II to handily beat the Bulls, 138-96, the Warriors’ best offensive showing of the season.

If the Warriors were humbled by the Bucks on Thursday — Kerr described the 39-point halftime deficit as humiliating — they dished out an equal dose to another team with playoff prospects the following night. Milwaukee may be the defending champions, but Chicago was the team on top of the Eastern Conference entering Friday.

The Warriors (31-11) improved to 8-4 against the top four teams from both conferences.

With 78 points in the first half, the Warriors scored more than any other first half this season (and outdid their previous night’s opponent by one). They took a 31-point lead into intermission and ended the game with their widest margin, 42 points. Unlike the previous night, the Bulls mounted no second-half comeback.

The two nights could not have been more different. (Even in a literal sense — Golden State became the second team in NBA history to lead by 30 at halftime a game after trailing by that many at the break.)

For the second straight night, the Warriors reserves got a chance to shine after halftime with the game already decided — only on the other side Friday.

Kuminga was flying all over the court, but his most common destination was the rim. The rookie turned in the performance of his young career, only missing two of his 12 shots and finishing with a game-high 25 points — and a few thunderous dunks.

He put an exclamation mark on it with an emphatic rejection at the rim late in the fourth quarter, one of three blocks for the über athletic 19-year-old.

Kerr commended the second unit’s never-quit attitude against the Bucks, diving to the floor for loose balls despite the big deficit. Against the Bulls, it was the veterans who were causing havoc on defense.

Andre Iguodala was a frequent presence in passing lanes, finishing with four steals, while Otto Porter Jr. matched a career-high with five. The Warriors forced a total of 14 Bulls turnovers — on 12 steals — while only giving the ball away seven times themselves, another stark departure from the previous night.

The defensive performance was made all the more impressive with the absences of Draymond Green and Gary Payton II.

Porter started in place of Green and knocked down the first shot of the game, one of three straight 3-pointers to start the game that set the tone for the rest of the night.

Klay Thompson’s minutes are about to increase, …read more

Golden Globes 2021: The Complete List of Nominees | Entertainment Weekly
People side with political tribe even when COVID survival plan is same, researchers finds

‘You had no right to take a life that I put in this world’: Vallejo man sentenced to 21 years in Oakland homicide