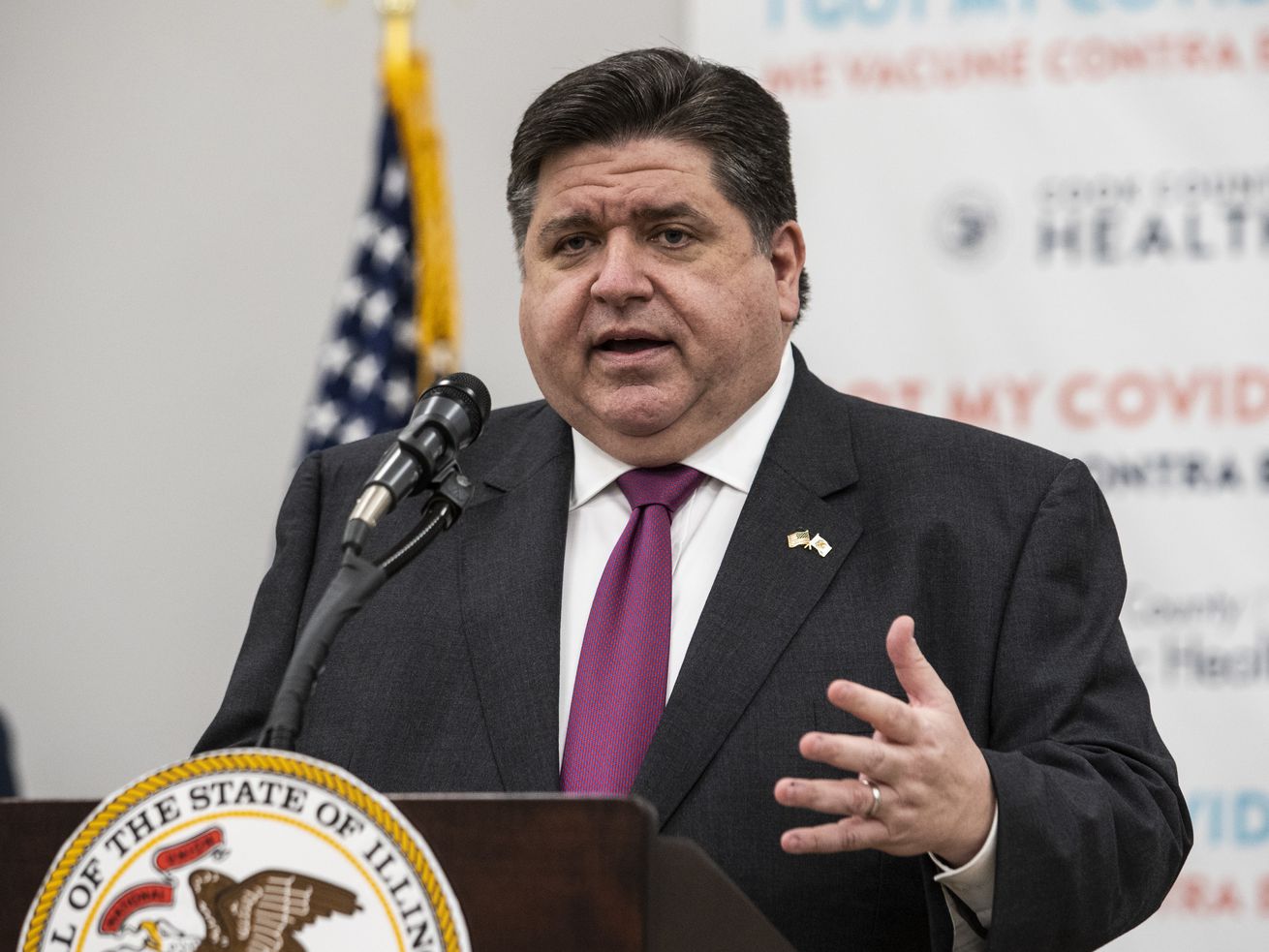 Gov. J.B. Pritzker speaks at a mass vaccination site in Forest Park on Thursday. All residents 16 and older will be eligible for shots starting Monday. | Ashlee Rezin Garcia/Sun-Times

“We now need to get as many shots into arms as quickly as we possibly can,” the governor said. “I want to make sure that people in Chicago know that they are welcome to sign up for our mass vaccination sites.”

COVID-19 vaccine providers will open 150,000 appointments across the Chicago suburbs next week when eligibility expands to all Illinois residents 16 or older, Gov. J.B. Pritzker announced Thursday.

Chicago residents can snap up some of those suburban slots since the city won’t make adult vaccine eligibility universal until April 19 — and they’re “absolutely” encouraged to do so, as the entire state faces a third coronavirus surge, Pritzker said.

“We now need to get as many shots into arms as quickly as we possibly can,” the governor said at a west suburban Forest Park mass vaccination site. “We’re reserving some vaccine to make sure we’re targeting particularly vulnerable groups that aren’t fully vaccinated yet, but right now we just want people to show up and get vaccinated as soon as possible.

“I want to make sure that people in Chicago know that they are welcome to sign up for our mass vaccination sites,” Pritzker said.

Last week, the governor criticized Mayor Lori Lightfoot’s administration for keeping a tighter lid on eligibility due to short supply. Pritzker took a softer stance Thursday, saying the vaccine rollout has been “a complicated endeavor for everybody.”

“There will just be a week there between April 12 and April 19, but if people choose to come to our mass vaccination sites, they’re absolutely welcome,” he said.

Chicago-area providers are slated to receive more than 250,000 doses in all next week, including for the 11 collar county mass vaccination sites plus pharmacies, hospitals and other local sites.

After a record-breaking 154,201 shots were given statewide Wednesday, one in five Illinois residents is now fully vaccinated, according to the Illinois Department of Public Health.

The state is vaccinating more people than ever, averaging almost 113,000 shots per day over the past week. About 42% of residents 16 or older have gotten at least one dose, and 73% of seniors have gotten a shot.

Previously, Cook County Board President Toni Preckwinkle had mostly stayed in lockstep with Lightfoot in remaining a step behind the rest of the …read more

Golden Globes 2021: The Complete List of Nominees | Entertainment Weekly
Protest held in Jacksonville over ‘anti-mob’ bill after being approved by Senate committee