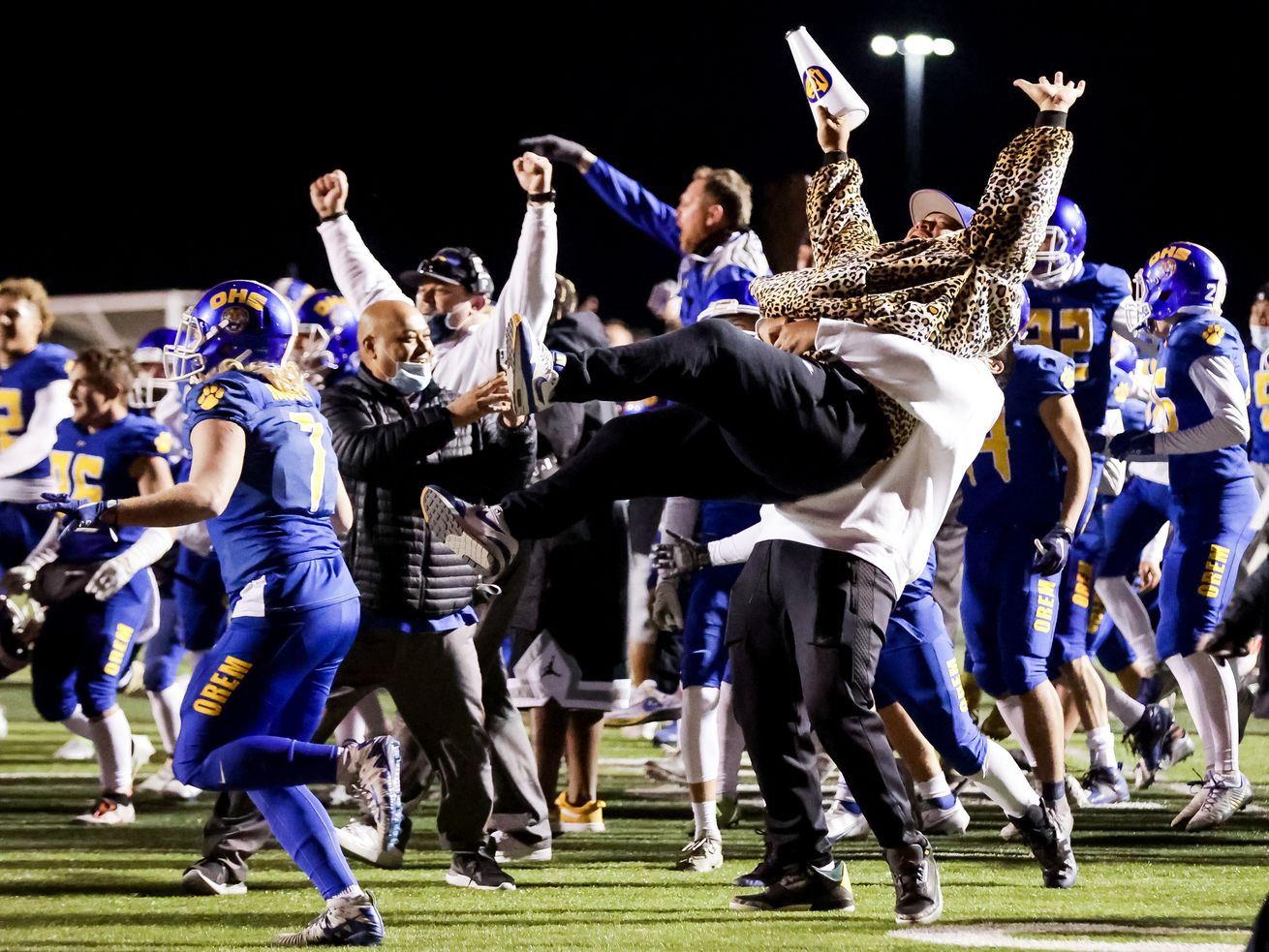 Orem head coach Gabe Sewell is lifted into the air as the team celebrates their win over Timpview in the 5A football state championship game at Cedar Valley High in Eagle Mountain on Friday, Nov. 20, 2020. | Spenser Heaps, Deseret News

A year later, Orem is still two touchdowns better than Timpview and still the best 5A football team in Utah.

In Friday’s highly anticipated championship rematch with rival Timpview, Orem flexed its muscles after halftime, scoring three straight touchdowns during one stretch to pull away for the 26-13 victory and a fourth straight state championship.

Orem becomes the fourth program to win four consecutive titles, and next year it will have a chance to tie the state record with a fifth straight title.

“Playing in this legacy is honestly a blessing to everyone in here, even if you don’t and don’t get any playing time to know you’re a part of this,” said Orem standout Paxton Skipps, who made major contributions on both sides of the ball, all while playing with a torn groin muscle.

That torn groin muscle eventually forced him to the bench for good late in the fourth quarter as Orem’s defense tried to hold off Timpview’s rally attempt.

Even without Orem’s second-leading tackler on the field, the Tigers still stuffed Timpview on four straight running plays near the goal line with under two minutes remaining to seal the win. Skipps wasn’t able to storm the field with his teammates after the victory formation kneel down, but not long after teammates Kade Brown, Jayden Ahyou and Joe Smith ran to him on the bench and carried him to the celebration in the end zone.

Skipps scored Orem’s first two touchdowns, recorded 10 tackles and also grabbed an interception all while playing with the groin injury he sustained two weeks ago.

“In my head I said pain is temporary, the end result is more important,” said Skipps.

While Skipps rushed for two scores, Smith added 94 yards and a touchdown, with Kolton Brown-Dye adding a 23-yard TD run in the fourth quarter to cap the scoring for Orem.

It was exactly the type of balanced performance Orem interim coach Gabe Sewell figured his team would need against a very strong Timpview defense.

“We don’t have those turn ’em on turn ’em off type of guys, we’ve got a very good collaborative effort team and everybody knew their role and played their part,” said Sewell.

At times it was a very sloppy championship game, plagued by 30 total penalties for 261 yards and then six total turnovers.

Neither offense could get much going in the first half, with the score level 6-6 at the break.

Timpview scored first on a blown coverage in Orem’s secondary, with Liu Aumavae throwing a 37-yard TD pass to Ammon Key for the 6-0 lead late in the first quarter.

The T-Birds tried to catch Orem by surprise with an onside kick, but they were whistled for kick-catch interference and conceded great field position. Three plays later, Skipps raced in in from 36-yards out to the tie …read more

ChurchBeat: Spotlight shines on a prophet, football and healing wounds