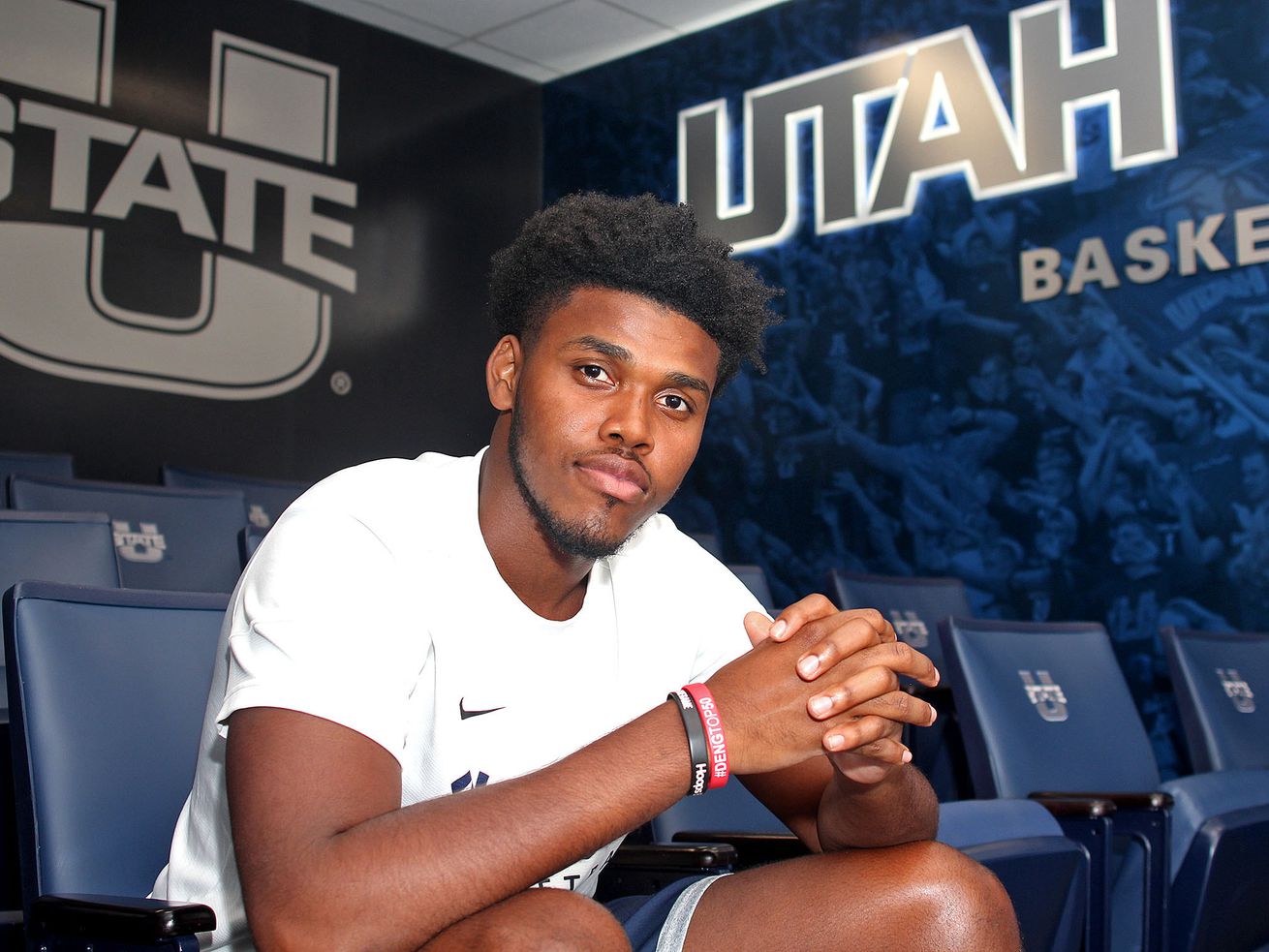 RJ Eytle-Rock transferred from the University of Maryland, Baltimore County to Utah State and is already taking people by surprise

LOGAN — While he hasn’t had an opportunity to catch many people by surprise with his playing ability just yet, new Utah State guard RJ Eytle-Rock does admit that he’s caught a few people off guard with his country of origin since arriving in Cache Valley about a month ago.

“It’s usually not until they hear my accent, and then they’re like, ‘Where are you from?’ And then I tell them,” explained Eytle-Rock, who was raised in South London. “But even from when I first came out here, I feel like I’m losing my accent a little bit.”

In fact, Eytle-Rock’s British accent is barely discernible when providing short answers to questions. But the longer he elaborates, the more obvious it becomes, even while clearly making a concerted effort to adjust to life in the United States by referring to his first favorite sport as “soccer” rather than “football.”

“I was a soccer kid,” he proclaimed. “That’s the first sport everyone plays over there, so I played that way before basketball and played until I was about 15 years old.”

An Arsenal F.C. fan, Eytle-Rock said “I was very, very upset when we lost,” referring to England’s recent loss to Italy in the Euro 2020 final.

The same can be said of the last organized basketball game Eytle-Rock played in.

Back on March 3, Eytle-Rock was a junior guard at the University of Maryland, Baltimore County when the Retrievers — the top-seeded team in the America East Tournament — blew a 12-point halftime lead on its way to a 79-77 loss to UMass Lowell.

Eytle-Rock scored a team-high 18 points in the setback that abruptly ended UMBC’s season with a 14-6 record.

High school football: After struggling in 3A, South Summit is now back in 2A again and pegged as the 2A North region favorite

“That was a good year until the very end,” Eytle-Rock recalled. “It was a good team. We had good team chemistry, on and off the court, with the coaching staff and the players. It was a good balance of everything.”

Eytle-Rock didn’t know it at the time, but that balance would suddenly be upset a month later when his coach, Ryan Odom, was hired as the new head coach at Utah State. About five days after Odom’s departure, Eytle-Rock added his name to the long list of available players in the NCAA’s transfer portal because he didn’t know anything about UMBC’s new coach and “I just wanted to see what other options there were.”

He says he ended up being contacted by several schools, including Florida Gulf Coast, Bradley and Southern Illinois, but then Eytle-Rock’s former Retrievers teammate, Brandon Horvath, reached out to let him know that he was going to join Odom at USU for his final collegiate season. Odom had similarly contacted Eytle-Rock about coming to Utah State, and a couple of days after …read more

How did MyKayla Skinner and Grace McCallum do in Olympic qualification?

Did BYU basketball get stronger this offseason? Sizing up the Cougars’ new-look roster