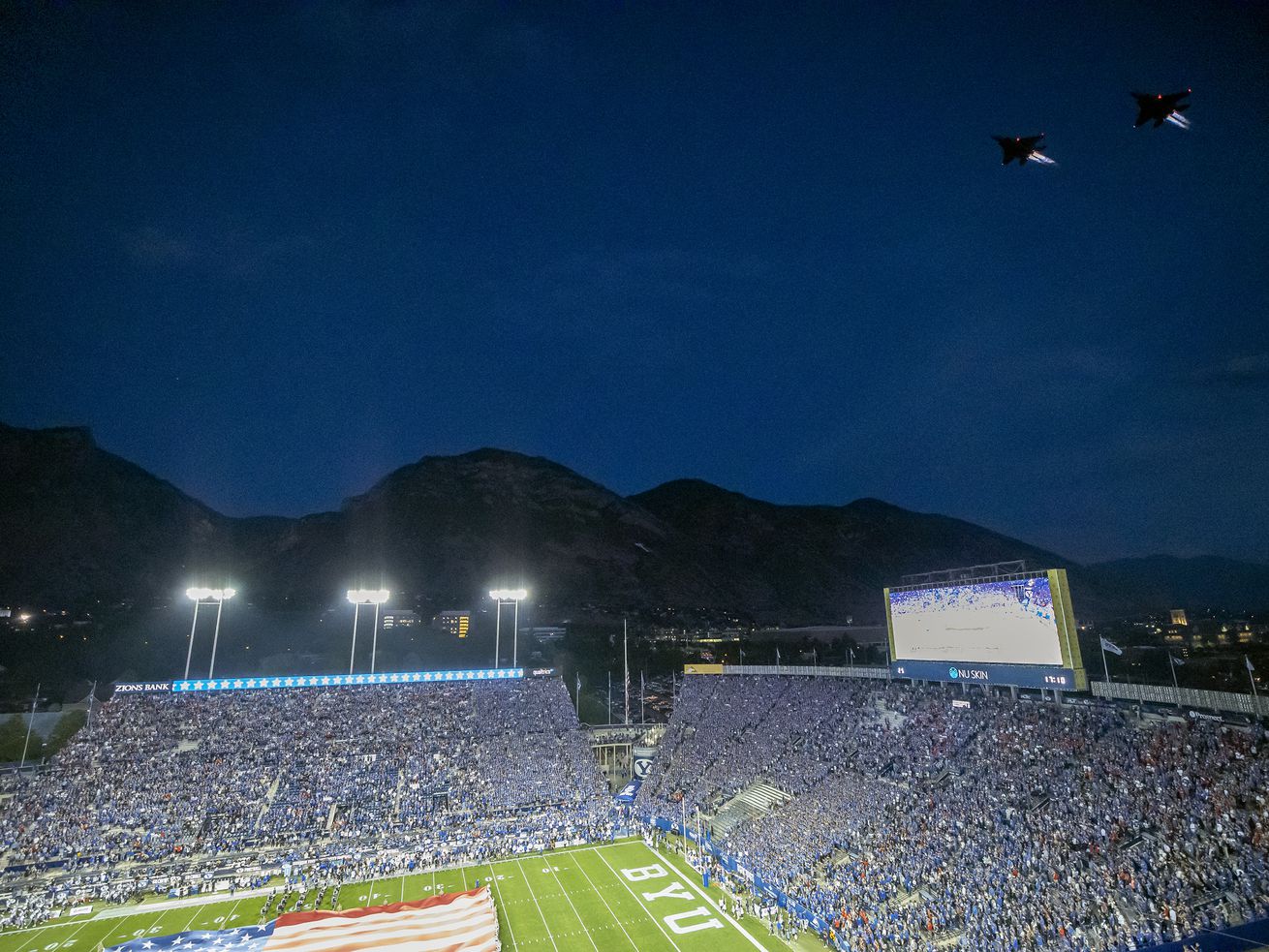 Two F-15E’s from the 389th Fighter Squadron at Mountain Home Air Force Base in Idaho perform a flyover as BYU and Utah prepare to play an NCAA football game at LaVell Edwards Stadium in Provo on Saturday, Sept. 11, 2021. | Scott G Winterton, Deseret News

BYU and Utah football fans put the rivalry aside before Saturday night’s game to participate in some tributes in commemoration of the 20-year anniversary of the Sept. 11, 2001, terrorist attacks on the East Coast.

Recent events were also not forgotten.

Decals on the back’s of BYU’s helmets read: 9/11 Never Forget.

Utah’s helmets carried a decal with a U.S. flag depiction and 9-11-01 above it with the twin towers forming the No. 11.

Saturday morning, BYU fans participated in a “Tower Climb,” scaling some 2,071 steps on the bleachers at LaVell Edwards Stadium.

Thank you to everyone that was a part of our Tower Climb this morning. #NeverForget pic.twitter.com/ZVNUk0xDV8

A 60-yard American flag was unfurled by U.S. servicemen and servicewomen at midfield before the game, and at the conclusion of the national anthem there was a jet flyover that left the crowd gasping in surprise.

“I think tributes are significant and make you think that there are things in life bigger than football, other things going on in the world,” BYU receiver Neil Pau’u said Wednesday.

BYU offensive coordinator Aaron Roderick said he tries to keep the game and 9/11 tributes “in separate boxes” in his mind.

“That way I can focus on doing this job and also show the proper respect for what was a huge event in all of our lives,” Roderick said.

Legends on the flags

BYU brought back four of the most prolific offensive players in its history to carry out the team and alumni flags on Saturday night.

Not coincidentally, Hall was the quarterback the last time BYU defeated the Utes, throwing the game-winning touchdown pass to Andrew George in overtime to give the Cougars a 26-23 win.

Pitta had nine catches for 127 yards in three games against the Utes, while Collie had 18 catches for 304 yards and a TD. Collie left for the NFL before his final season of eligibility.

Defensive back Keenan Ellis, the BYU junior who was carted off the field and hospitalized during the Cougars’ 24-16 win over Arizona last week, did not play. Sitake said the other players who were injured in last week’s opener would be game-time decisions.