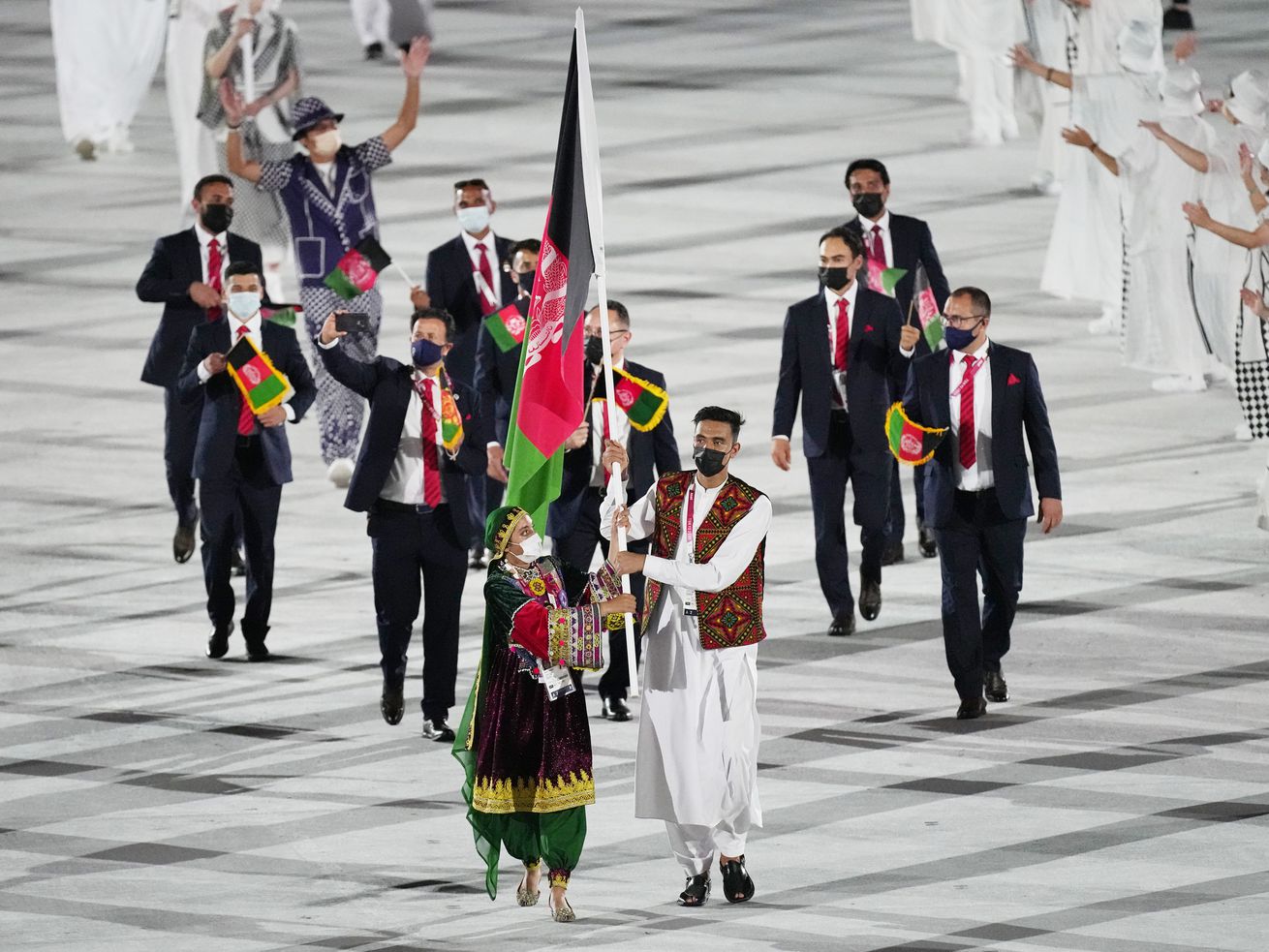 Kimia Yousofi and Farzad Mansouri, of Afghanistan, carry their country’s flag during the opening ceremony in the Olympic Stadium at the 2020 Summer Olympics on Friday, July 23, 2021, in Tokyo. None of the athletes from Afghanistan who competed in the Tokyo Summer Games returned to their homeland, the result of the International Olympic Committee’s ongoing effort to protect members of the Olympic community in a country where the Taliban is back in control after two decades with the withdrawal of U.S. troops. | David J. Phillip, Associated Press

None of the athletes from Afghanistan who competed in the Tokyo Summer Games returned to their homeland, the result of the International Olympic Committee’s ongoing effort to protect members of the Olympic community in a country where the Taliban is in control again after two decades following the withdrawal of U.S. troops.

About 100 Afghans have received help to relocate so far, IOC President Thomas Bach told reporters during a recent virtual news conference, including two athletes now training outside Afghanistan for the upcoming 2022 Winter Games in Beijing and the first IOC member from Afghanistan, Samira Asghari.

Asghari, 27, a member of the Afghanistan women’s national basketball team who joined the IOC in 2018 as the organization’s youngest member, “is safe and she has been also instrumental in these humanitarian efforts,” Bach said, declining to offer specifics he warned could put her and others in danger.

“Please understand that we cannot go into more details in this respect. We have to take into consideration the safety and security of the other members of the Olympic community in Afghanistan. These issues have to be dealt with, with the necessary discretion,” Bach said.

He said the “first phase” of the effort started on the final day of the Tokyo Summer Games last month at the request of the Afghanistan national Olympic committee and humanitarian visas continue to be sought, especially for the women and girls likely to be most at risk under the Taliban.

High school football: Stansbury finds a spark to rally past rival Tooele and into Region 7 lead

Other Olympic organizations around the world are involved, including the U.S. Olympic & Paralympic Committee, which has been “in close communication” with both the Afghan Olympic committee and the IOC, according to spokesman Jon Mason.

Bach said the situation will continue to be monitored “very closely,” and at least for now, Afghanistan’s Olympic committee continues to be recognized under the Taliban, which had previously enforced an interpretation of Islamic law that forbids women to study or work and banned outside influences.

What wasn’t addressed by the leader of the Switzerland-based organization, which is expected to decide in the coming months whether Salt Lake City hosts another Winter Games, is the controversy surrounding how America’s longest war ended with the abrupt collapse of Afghanistan’s U.S.-backed government and a tumultuous exit.

More than 100,000 American citizens as well as Afghans who assisted U.S. troops during the war were evacuated by the military in the weeks leading up to the self-imposed Aug. 30 deadline. But others were left …read more

Golden Globes 2021: The Complete List of Nominees | Entertainment Weekly
Age is just a number. Trust me. I just went viral for ‘Twilight’

‘He’s got it all’: Patience and perseverance paying off for Micah Bernard