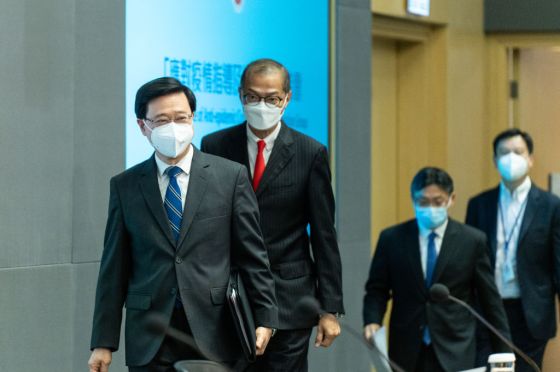 The move comes ahead of a financial conference in early November, hosted by Hong Kong’s central bank, which it hopes will signal the city’s revival. Some Wall Street bigwigs had indicated that their attendance would be

Hong Kong officials announced on Friday the end of hotel quarantine for incoming travelers, as the government seeks to repair its battered image as a global financial center.

From Sept. 26, visitors and returning residents do not have to undergo isolation in a designated hotel. They will be allowed to go to offices and use public transport but they won’t be allowed to visit restaurants and bars for their first three days in the city.

Rapid Antigen Tests (RAT) will be required every day for a week, with the results uploaded to a government website. Travelers will also have to do PCR tests on arrival, and at licensed testing facilities on the second and fourth and sixth days after their arrival.
[time-brightcove not-tgx=”true”]

Read More: How to Decide If Business Travel Is Worth It Right Now

“We should give the greatest economic momentum to our society while we balance risks,” the Chinese territory’s top official, Chief Executive John Lee, said at a press conference announcing the changes.

The city is one of the last places in the world where quarantine for incoming travelers is still required, and the government has faced intense pressure to open up from the business sector.

The move comes ahead of a financial conference in early November, hosted by Hong Kong’s central bank, which it hopes will signal the city’s revival. Some Wall Street bigwigs had indicated that their attendance would be contingent on Hong Kong ending hotel quarantine. (Several major events for 2023 have already been postponed or cancelled, including the RISE Conference, billed as the “largest tech gathering in Asia.”)

Travelers have been required to undergo self-funded hotel quarantine for as many as 21 days at times during the pandemic. Last month, the period was reduced to three days in a hotel followed by four days of home medical surveillance.

The end of hotel quarantine is expected to be met with widespread local relief. Hong Kong’s economy entered a recession in the second quarter, and pandemic restrictions have dented the profits of some of the city’s largest employers.

Olivier CHOUCHANA/Gamma-Rapho via Getty Images An employee in PPE places meal trays at the entrance to the rooms of a quarantine hotel in Hong Kong on Sept. 27, 2021

The tough COVID regime and an exodus of talent mean the city has also been ousted as Asia’s top financial center by Singapore, according to a new report, compiled by London think-tank Z/Yen and the China Development Institute.

The website of the city’s flagship carrier Cathy Pacific saw a surge of traffic on the strength of the news Friday afternoon. At 4:30 p.m. local time, there was a wait of five minutes to access the website. But the latest changes may not be …read more

China Unveils Plans to Send Spacecraft to Jupiter and Uranus