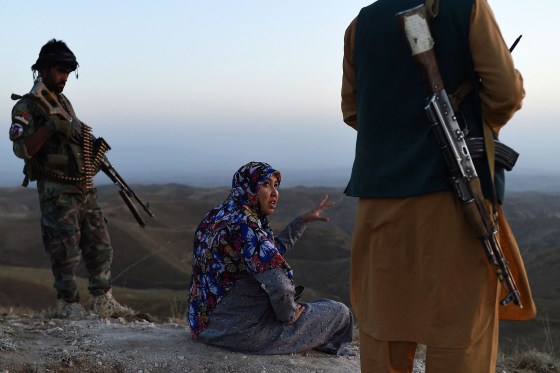 On the run from the Taliban

When the news of Balkh’s surrender broke, Mazari was in the office of Mohammad Farhad Azimi, the provincial governor. His guards ran into the office shouting that government forces had surrendered, and the Taliban were entering Mazar-i-Sharif from all directions. She recalls feeling suffocated as the reality of defeat started to sink in. There were frantic phone calls from militia leaders in Charkint, about 45 miles to the south, telling her that the roads to her district were blocked and the Taliban were planning to ambush anyone who passed through. Mazari commended her men and told them to stand down.

“Continuing to fight would be against the interests of our people,” she says.

Azimi suggested finding a way to the border with Uzbekistan and the town of Hairatan, a 75-minute drive from Mazar-i-Sharif. From there, the Afghanistan-Uzbekistan Friendship Bridge, spanning the Amu River, could take them to safety.

“We set off in a convoy together with my husband and guards. Several high-profile leaders, including former vice-president and warlord,

For the past few weeks, the world has believed Salima Mazari to be a prisoner of the Taliban—and possibly dead.

One of only three female district governors in Afghanistan, and the leader of a pro-government militia, the 39-year-old had an international reputation as a fearless fighter. The Guardian profiled her at length. She was interviewed by the Associated Press, Agence France-Presse and other international news outlets, fascinated by her courage in the defense of her district, Charkint, which lies about 230 miles north of Kabul.

Mazari had survived several ambushes and believed herself to be on a Taliban hit list. When the provincial capital, Mazar-i-Sharif, fell to the Taliban in mid-August, she went missing in the commotion and didn’t surface in the days following. The fighting in Charkint had been fierce.

“Before the collapse of Kabul and Mazar-i-Sharif, the Taliban attacked Charkint district more than 30 times from different directions,” she tells TIME.

Several media outlets, including People magazine and Insider, reported Mazari as possibly captured. On Twitter, supporters worldwide adopted the hashtag #FreeSalima in a campaign demanding her release. Some began to wonder if she was even alive. As stories began to filter in of the Taliban settling old scores—killing a pregnant police officer, and shooting senior security officials—many assumed the worst.

But we can report that Mazari is alive. She was never captured. After a harrowing escape from Afghanistan, she is now at an undisclosed location in the United States.

We know this because one of the authors of this piece was involved in her escape.

We are two journalists—Zakarya is an Afghan and Robyn a Canadian—who have reported from the strife-torn country in the past. Zakarya was based in Afghanistan but able to leave for Paris during the evacuation. He kept in touch with Mazari after the Taliban seized power and she went into hiding. Together in a joint rescue effort by Afghans, Americans and Canadians, he helped to play a part in her escape.

This is what happened.

The fall of Mazar-i-Sharif

With a population of around 32,000, Charkint is a mountainous area of small hilltop villages and grazing lands in Balkh province, near the border with Uzbekistan. When she became governor in 2018, Mazari was determined to bring better outcomes for her community, but the job was never easy.

In her early days in office, she organized the recruitment and training of local militia and government forces to fight against the Taliban. When conflict broke out, she picked up a gun and joined her men on the front line, earning respect as a staunch, outspoken commander. In 2020, she fearlessly negotiated the surrender of over 100 Taliban insurgents.

As the Taliban campaign intensified over the summer, Mazari and her militia held out—inflicting, she says, “large numbers of casualties” …read more

20 Years After 9/11, the West Can Still Salvage Its Standing in the World

I Tried Lab-Grown Fish Maw. Here’s Why It Could Help Save Our Oceans